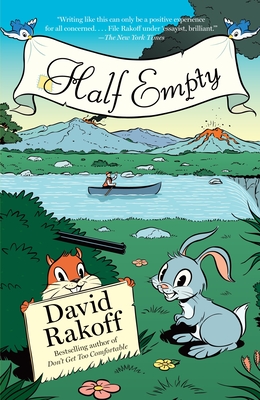 “This newest collection of essays by the acerbic Rakoff is both canny and thought provoking. He challenges assumptions and is withering in his criticisms, but he also reveals his own foibles, personal sorrows, and afflictions. Enlightening, unforgettable, and heart wrenching.”
— Tova Beiser, Brown University Bookstore, Providence, RI

In this deeply smart and sneakily poignant collection of essays, the bestselling author of Fraud and Don’t Get Too Comfortable makes an inspired case for always assuming the worst—because then you’ll never be disappointed.

Whether he’s taking on pop culture phenomena with Oscar Wilde-worthy wit or dealing with personal tragedy, Rakoff’s sharp observations and humorist’s flair for the absurd will have you positively reveling in the untapped power of negativity.

David Rakoff is the author of four New York Times bestsellers: the essay collections Fraud, Don’t Get Too Comfortable, and Half Empty, and the novel in verse Love, Dishonor, Marry, Die, Cherish, Perish. A two-time recipient of the Lambda Literary Award and winner of the Thurber Prize for American Humor, he was a regular contributor to Public Radio International’s This American Life. His writing frequently appeared in The New York Times, Newsweek, Wired, Salon, GQ, Outside, Gourmet, Vogue, and Slate, among other publications. An accomplished stage and screen actor, playwright, and screenwriter, he adapted the screenplay for and starred in Joachim Back’s film The New Tenants, which won the 2010 Academy Award for Best Live Action Short. He died in 2012.

“Writing like this can only be a positive experience for all concerned. . . .  File Rakoff under ‘essayist, brilliant.’” —The New York Times

“Some people believe in the power of positive thinking. The rest of us believe in David Rakoff.” —Daily Candy

“Rakoff wanders among our cultural myths, piercing them with a finely sharpened sarcasm. . . . As Rakoff tenderly probes his fears, he makes clear that for all his detachment, he is part of our tribe. He’s just funnier than most of us.” —The Miami Herald

“A pure pleasure to read.” —The Observer’s Very Short List

“One of our funniest writers.” —People

“Right now, this country is brimming over with kindness—some real, some feigned. It is wit, unfeigned, that is gasping for air. . . . For the sake of the future, come back soon, David Rakoff.” —San Francisco Chronicle

“Rakoff can issue a withering snark with the best of them. But once his rapier wit has sliced the buttons off his target’s clothing, revealing the quivering, vulnerable mass within, his fundamental sense of decency gets the best of him.” —Salon

“Half Empty balances its darker aspects with wickedly amusing takes on a variety of subjects.” —The Toronto Star

“Rakoff is so keenly observant and dead-on with his criticism, you get the impression most of our eyes would cross and cartoon birds fly above our heads before we could make it halfway to the elegant, smart conclusions he draws. . . . A writerly collection to make giddy even the most erudite lover of words. An undisputed KO for negative thinking.” —Booklist

“Rakoff manages to make pessimism sexy. . . . While Rakoff seems to revel in his role as a modern-day Thomas Hobbes, it’s evident that he remains responsible in his critique, never trouncing a subject without provocation while simultaneously opening the reader’s eyes to everyday lunacy.” —Kirkus Reviews