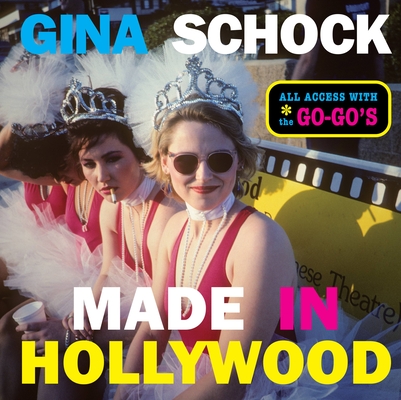 The Go-Go’s were the first all-female rock group in history to write their own songs, play their own instruments, and reach the top of the Billboard charts with their #1 album, Beauty and the Beat. Made In Hollywood is drummer Gina Schock’s personal account of the band, which includes a treasure trove of photographs and memorabilia collected over the course of her 40-year career.

The Go-Go’s debut album, Beauty and the Beat, rose to the top of the charts in 1981 and their hit songs "We Got the Beat", "Our Lips Are Sealed", “Vacation”, and "Head Over Heels" (to name a few) served as a soundtrack to our lives in the ‘80s.

Now, after the release of their Critics Choice Award-winning Showtime documentary, and in anticipation of their forthcoming induction into the Rock & Roll Hall of Fame and their 2021 West Coast shows, Gina takes fans behind the scenes for a rare look at her personal images documenting the band's wild journey to the heights of fame and stardom. Featuring posters, photographs, Polaroids, and other memorabilia from her archives, Made In Hollywood also includes stories from each member of the Go-Go’s, along with other cultural luminaries like Kate Pierson, Jodie Foster, Dave Stewart, Martha Quinn, and Paul Reubens.

With a style as bold and distinctive as any Go-Go’s album, Made In Hollywood is the perfect tribute to one of the world's most iconic groups.

Gina Schock has been playing in rock bands since the age of thirteen, and she's been the drummer of the Go-Go’s for over four decades. In addition to her work as a drummer, guitarist, and producer, Gina has co-written songs for Miley Cyrus and Selena Gomez. She has also co-written songs with Alanis Morissette and Carnie and Wendy Wilson of Wilson Phillips.