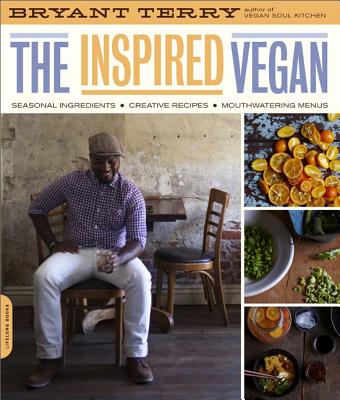 From the James Beard Award-winning author of Afro-Vegan and Vegan Soul Kitchen: ingredients that inspire, unique recipes, and menus for everyday feasts.

Marking his 10-year anniversary working to create a healthy, just, and sustainable food system, Bryant Terry offers more than just a collection of recipes. In the spirit of jazz jam sessions and hip hop ciphers, The Inspired Vegan presents a collage of food, storytelling, music, and art.

Bryant shares his favorite preparation / cooking techniques and simple recipes -- basics to help strengthen your foundation for home cooking and equip you with tools for culinary improvisation and kitchen creativity. He also invites you to his table to enjoy seasonal menus inspired by family memories, social movements, unsung radical heroes, and visions for the future. Ultimately, The Inspired Vegan will help you become proficient in creating satisfying meals that use whole, fresh, seasonal ingredients and are nutritionally balanced -- and full of surprising, mouthwatering flavor combinations.

Bryant Terry is a James Beard Award-winning chef and food justice activist. He is the author of Vegan Soul Kitchen, Afro-Vegan, Vegetable Kingdom and Black Food. He lives in Oakland, California with his wife and two daughters.

Tuscan Citizen, 2/24/12
“This is more than a collection of recipes…it is a sassy collage of stories, music, art, and of course, delicious vegan cuisine.”

Technorati, 3/6/12
“A fabulous mix of African-American, Southern, and vegan recipes and menus that reminds us of what it means to miss New Orleans.”

VegNews, April 2012“Flipping through The Inspired Vegan is more like sitting on a barstool next to Terry while he works away at the kitchen counter. The sheer amount of information included in the book is impressive on its own—each recipe comes complete with a soundtrack and recommended book or film…This book could be a course for college credit, and should be. Oh, and it happens to have stop-in-your-tracks recipes…Terry’s passion of for justice comes through just as clearly as his enjoyment of open, delicious food and the combination works wonderfully. This is a book you’ll want to spend time with, put down, pick up, splatter sauce on, plan parties from, and share with everyone you know.”
Taste for Life, April issue
“Soulful approach to healthy living…Terry offers recipes that can bring people together in the celebration of healthy, delicious food"
Portland Press Herald, 9/12/12

JET Magazine, 1/23/12
“The book is overflowing with great entrée ideas”
VegNews
“[Terry’s] “best book yet.” Jose Mercury News, 2/13/12
“The Inspired Vegan is loaded with unexpected delicacies” Publishers Weekly, 2/20/12Terry is a cultural omnivore who takes his own inspiration from music, film, and art, and he punctuates his recipes with suggested playlists and readings. In all, this is a wonderful volume for mindful, socially conscious, and urbane cooks.” Library Journal, 2/15/12
“Terry’s follow-up to his excellent Vegan Soul Kitchen lays bare the many inspirations behind his creative vegan cuisine. Each of 12 seasonal menus begins with a quote and a story, and Terry lists book and music recommendations in sidebars. This approach, while unconventional, offers an intriguing way to connect to Terry’s recipes…Highly recommended for vegans who like to entertain.”

Alice Waters, chef, author, and proprietor of Chez Panisse
“Bryant Terry knows that good food should be an everyday right and not a privilege.” Raj Patel, author of The Value of Nothing and Stuffed and Starved, October 16, 2011
“Bryant Terry is a culinary muse unlike any other. His great gift is to reconnect us with the radical joy that food brings, making inspired vegans out of us all.” Adam Mansbach, author of the #1 New York Times bestseller Go the F*ck to Sleep, October 17, 2011
“Bryant Terry’s funky, flavorful cuisine is remixing our diets—he’s the Pete Rock of collard greens. This is more than a cookbook; it’s a call to action, a recipe for a more just and delectable world.” Isa Chandra Moskowitz, coauthor of Veganomicon, November 2, 2011
"Bryant Terry's recipes manage the impossible: everyday cooking that is approachable and homey, yet always creative, flavorful and never mundane."