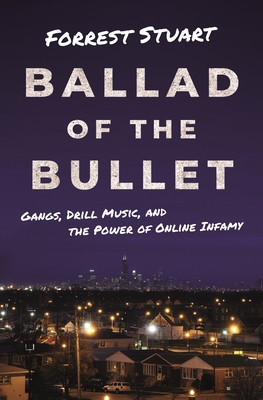 By Forrest Stuart
$27.95
Available to order (allow for shipping time to bookstore or direct-to-home)

How poor urban youth in Chicago use social media to profit from portrayals of gang violence, and the questions this raises about poverty, opportunities, and public voyeurism

Amid increasing hardship and limited employment options, poor urban youth are developing creative online strategies to make ends meet. Using such social media platforms as YouTube, Twitter, and Instagram, they're capitalizing on the public's fascination with the ghetto and gang violence. But with what consequences? Ballad of the Bullet follows the Corner Boys, a group of thirty or so young men on Chicago's South Side who have hitched their dreams of success to the creation of "drill music" (slang for "shooting music"). Drillers disseminate this competitive genre of hyperviolent, hyperlocal, DIY-style gangsta rap digitally, hoping to amass millions of clicks, views, and followers--and a ticket out of poverty. But in this perverse system of benefits, where online popularity can convert into offline rewards, the risks can be too great. Drawing on extensive fieldwork and countless interviews compiled from daily, close interactions with the Corner Boys, as well as time spent with their families, friends, music producers, and followers, Forrest Stuart looks at the lives and motivations of these young men. Stuart examines why drillers choose to embrace rather than distance themselves from negative stereotypes, using the web to assert their supposed superior criminality over rival gangs. While these virtual displays of ghetto authenticity--the saturation of social media with images of guns, drugs, and urban warfare--can lead to online notoriety and actual resources, including cash, housing, guns, sex, and, for a select few, upward mobility, drillers frequently end up behind bars, seriously injured, or dead. Raising questions about online celebrity, public voyeurism, and the commodification of the ghetto, Ballad of the Bullet offers a singular look at what happens when the digital economy and urban poverty collide.

Forrest Stuart is associate professor of sociology and director of the Ethnography Lab at Stanford University. A 2020 MacArthur Fellow, Stuart is the author of Down, Out, and Under Arrest. Twitter @ForrestDStuart