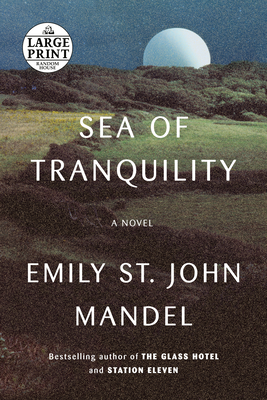 “A gem of a novel, spiraling out of place and time to shape our present hopes and anxieties into a story of peace and resilience. Mandel weaves effortlessly between historical and science fiction and is a master of immersive storytelling.”
— Dan Brewster, Prologue Bookshop, Columbus, OH

NEW YORK TIMES BEST SELLER • The award-winning, best-selling author of Station Eleven and The Glass Hotel returns with a novel of art, time, love, and plague that takes the reader from Vancouver Island in 1912 to a dark colony on the moon five hundred years later, unfurling a story of humanity across centuries and space.

“One of [Mandel’s] finest novels and one of her most satisfying forays into the arena of speculative fiction yet.” —The New York Times

Edwin St. Andrew is eighteen years old when he crosses the Atlantic by steamship, exiled from polite society following an ill-conceived diatribe at a dinner party. He enters the forest, spellbound by the beauty of the Canadian wilderness, and suddenly hears the notes of a violin echoing in an airship terminal—an experience that shocks him to his core.

Two centuries later a famous writer named Olive Llewellyn is on a book tour. She’s traveling all over Earth, but her home is the second moon colony, a place of white stone, spired towers, and artificial beauty. Within the text of Olive’s best-selling pandemic novel lies a strange passage: a man plays his violin for change in the echoing corridor of an airship terminal as the trees of a forest rise around him.

When Gaspery-Jacques Roberts, a detective in the black-skied Night City, is hired to investigate an anomaly in the North American wilderness, he uncovers a series of lives upended: The exiled son of an earl driven to madness, a writer trapped far from home as a pandemic ravages Earth, and a childhood friend from the Night City who, like Gaspery himself, has glimpsed the chance to do something extraordinary that will disrupt the timeline of the universe.

A virtuoso performance that is as human and tender as it is intellectually playful, Sea of Tranquility is a novel of time travel and metaphysics that precisely captures the reality of our current moment.

EMILY ST. JOHN MANDEL's five previous novels include The Glass Hotel and Station Eleven, which was a finalist for a National Book Award and the PEN/Faulkner Award for Fiction, has been translated into thirty-two languages, and is the basis for the HBO Max series by the same name. She lives in New York City with her husband and daughter.

“In Sea of Tranquility, Mandel offers one of her finest novels and one of her most satisfying forays into the arena of speculative fiction yet, but it is her ability to convincingly inhabit the ordinary, and…project a sustaining acknowledgment of beauty, that sets the novel apart…Born of…empathy and hard-won understanding, beautifully built into language, for all of us who inhabit this ‘green-and-blue world’ and who one day might live well beyond.”
—Laird Hunt, The New York Times

“Sea of Tranquility is broader in scope than any of Mandel’s previous novels, voyaging profligately across lands and centuries…Destabilizing, extraordinary, and blood-boiling…Mandel weds a sharp, ambivalent self-accounting—the type of study that tends to wear the label ‘autofiction’—to a speculative epic. We are shown what two forms can offer each other, and exposed to the interrogating possibilities of science fiction.”
—Katy Waldman, The New Yorker

“‘Reality is things as they are,’ Wallace Stevens declared, and who could argue with that? Well, legions of philosophers and any number of novelists, among them Emily St. John Mandel, who, like an ingenious origami artist, seems determined with each new work to add yet another fold to our perception of what is real and one further twist to what we think of as time…Transcendent.”
—Anna Mundow, Wall Street Journal

"Mandel delivers...with an impish blend of wit and dread. The paradoxes of Gaspery’s adventure will be familiar to anyone who’s studied Jean Baudrillard or seen “Back to the Future.” But Mandel has the stylistic elegance and emotional sympathy to make this more than merely an undergraduate bull session. Absent your own time portal to the 1990s, it’s a chance to... wrestle with the mind-blowing possibility that what is may be entirely different from what we see."
—Ron Charles, The Washington Post

"Bold and exciting...Sea of Tranquility is Ms Mandel’s most ambitious novel yet (which is saying something). Inventive and...mind-bending, thanks to her disrupted timelines and fully realised vision of lunar settlements and parallel universes...Her depiction of a future pandemic is recognisable and touching...An illuminating study of survival and, in the words of one character, 'what makes a world real.'"
—The Economist

“Fusing sci-fi and great storytelling, this imaginative novel from the author of Station Eleven explores how technology might control our fate if we abandon compassion.”
—People Magazine

"St John Mandel’s tender and idiosyncratic novel will undeniably make its own mark on its readers’ imaginations."
—Alexander Larman, The Guardian

"Mandel’s sensational sixth novel offers immense pleasures of puzzle box plotting and high-flying imagination... Masterfully plotted and deeply moving, this visionary novel folds back on itself like a hall of mirrors to explore just what connects us to one another, and how many extraordinary contingencies bring us to each ordinary day of our lives."
—Adrienne Westenfeld, Esquire

“I didn't just read Station Eleven, The Glass Hotel, or Mandel's latest, Sea of Tranquility. I lived in those novels and felt the remnants of their weird, chill atmosphere long after I had to move on…World builder is a phrase that's rightly used to describe Mandel's immersive powers as a novelist…Sea Of Tranquility is a poignant, ingeniously constructed and deeply absorbing novel that surveys big questions about the cruel inevitability of time passing, loss, the nature of what we consider reality and, in the end, what finally matters…Mandel is an important novelist of our moment, but doesn't settle for merely replicating our moment. She inhabits it even as she sees beyond it.”
—Maureen Corrigan, NPR’s Fresh Air

"There is both elegance and tenderness in Mandel’s narrative design...For her, science fiction allows us only enough escape from our context to let us regard it from a softening distance."
—Sophia Nguyen, The Nation

“Lovely, life-affirming…The project of Sea of Tranquility is about finding meaning and beauty within a world that is constantly dying, about relishing a life that seems always on the cusp of awful and irrevocable change…. Mandel’s prose is shot through with moments of unexpected lyricism…that take you by surprise with their limpid sweetness… Nourishing and needed. The world is always ending, this book says, and there is always beauty to be found in it.”
—Constance Grady, Vox

"If there is one thing Emily St. John Mandel is going to do, it’s tell a story that’s so good that you’ll keep reading even though the plot includes pandemics and loss and the frightening future of the planet. St John Mandel’s swift storytelling and puncturing emotional truths will leave you wishing it was hundreds of pages longer. She remains an instant-buy writer."
—Jenny Singer, Glamour

“‘When have we ever believed that the world wasn’t ending?’ asks a character in Emily St. John Mandel’s Sea of Tranquility… At a time when that fear is so acutely alive, the question is revelatory. While Mandel focuses on many of the things that terrify us, she also illustrates how hope and humanity are flames that can never be fully extinguished.”
—Adrienne Gaffney, Elle

"If you loved Station Eleven and The Glass Hotel, you’ll devour this dystopian novel that’s about time travel and mystery as much as it is about love, the importance of family and how much our individual actions impact the world. With vivid and memorable characters, gorgeously imaginative settings and a plot that will have you gasping aloud, it ping-pongs from an eerie encounter in North America in 1912 to the anxiety of trying to escape a plague-ravaged Earth to moon colonies that feel at once just like home and far from it. This is a triumph of science fiction, so give it a try even if the genre usually leaves you cold."
—Good Housekeeping

“Terrible things happen in her books—worlds end, lives crash, large numbers of people die—but even as Mandel looks at these events without flinching, she also always finds a way to upend our usual takes on them…. Survival, she has suggested again and again, may depend more on one’s ability to love than on how well-appointed a fortress one’s bunker is….Mandel almost seems to be looking straight at the reader…asking us, in effect, to look beyond the spectacle of apocalypse to the long sweep of history. The point isn’t the end, because there isn’t a definitive end, just a series of endings. The point is what the people left do next.”
—Stacey D’Erasmo, Oprah Daily

"It is the human story that Mandel excels at portraying...Her writing on nature echoes a brutal solitude, the unease that comes when one ascends a mountain, crosses an expanse of golden plains, or finds themselves floating in space."
—Nylah Burton, Shondaland

“Readers of Mandel’s other novels will remember her talent for subtly interweaving disparate narratives, and Sea of Tranquility rises to that area of expertise….Mandel masterfully connects characters’ observations and senses within any given moment….Sea of Tranquility is…for anyone who wants to think about what the end of the world means, and how our lives matter in the face of it.”
—Megan Otto, Observer

"Reading about a pandemic when the real world is still recovering from one would have been heavy going, were it not for the unerring grace of Mandel's prose."
—Olivia Ho, The Straits Times

“A very knowing novel…Powerful…Very enjoyable…A book brimming with a sense of wonder, a sense of humour, and a sense for the weirdness we’ve all been experienc­ing over the last couple of years.”
—Ian Mond, Locus Magazine

“I could write a thousand words about Emily St. John Mandel, and this book, and this moment but I won’t dare spoil it. Truly soul-affirming.”
—Emma Straub, best-selling author of All Adults Here

"A spiraling, transportive triumph of storytelling - sci-fi with soul."
—Kiran Millwood Hargrave, author of The Mercies

"An emotionally devastating novel about human connection: what we are to one another—and what we should be."
—Omar El Akkad, Scientific American

“Each character alone could probably carry a book, and so could the picture — not rosy, but hardly hopeless — that Mandel paints of a future Earth…Generous with flashes of wry humor…Mandel’s style is distinctly her own, and she excels at bringing brightness out of the dark. Readers will leave Sea of Tranquility like Station Eleven before it, feeling hope for humanity.”
—Gail Pennington, St. Louis Post Dispatch

“Mandel is an easy read…No matter where or when we touch down we feel at home in worlds much like our own….Which may be the point she’s getting at: we’re all, and will always be, part of a larger human story. In the face of pandemic or other catastrophes, all roads lead to home, whether those roads connect to the far edge of the Western world or the Far Colonies of space.”
—Alex Good, Toronto Star

“This slim novel is written in a cool, elegant voice, like that of a singer who never wastes a note and who suggests strong emotion underneath her reserve.”
—Jim Higgins, Milwaukee Journal Sentinel

"Mandel's writing is incredibly fluid and gripping and never failed to keep me reading."
—Piper Coe, The Eastern Echo

“A time-travel puzzle… Mandel’s prose is beautiful but unfussy; some chapters are compressed into a few poetic lines. The story moves quickly… In the end, the novel’s interlocking plot resolves beautifully, making for a humane and moving time-travel story, as well as a meditation on loneliness and love.”
—BookPage, starred

"Sea of Tranquility is [Mandel's] airship, offering readers a lifeline, and transporting them on a thrilling, wistful and memorable journey into the stars."
—Jodé Millman, Booktrib