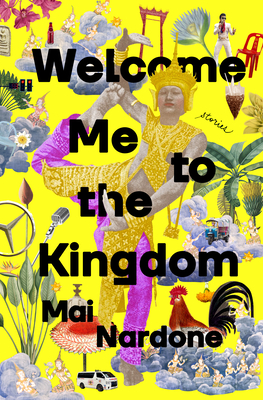 An immersive debut set across the temples, slums, and gated estates of late-twentieth century Bangkok, telling the story of three families striving to control their destinies in a merciless, sometimes brutally violent, metropolis.

“Mai Nardone is a writer with an atlas straight to the heart. I did not want to put this book down and neither will you.”—C Pam Zhang, bestselling author of How Much of These Hills Is Gold

We came with the drought. From the window of the train, the rich brown of the Chao Phraya River marked the turn from the northeast into the central plains. We came for Bangkok on the delta. The thin tributaries that laced the provinces found full current at the capital. And in the city, we’d heard, the wealth was wide and deep.

In 1980, young lovers Pea and Nam arrive in Bangkok in search of a life, and a world, beyond Thailand’s rural outskirts. Thirty days, they promise each other. Thirty days for Pea to find work, for him to put aside his violent and unstable past and take root in this strange new land. But Bangkok does not want for male laborers, especially teenage boys with thick provincial accents, and when time finally runs out on their promise, it’s Nam who ultimately adapts to the capital’s ruthless logic and survives.

Spanning decades and perspectives, seamlessly shifting between the absurd and the tenderhearted, the interwoven stories of Welcome Me to the Kingdom introduce three families—Nam, her American husband, Rick, and their daughter, Lara; Vitat, a Thai Elvis impersonator, and his only daughter, Pinky; and Tintin and Benz, orphans who have adopted each other as brothers—who employ various schemes to lie, betray, and seduce their way to the “good life.”

These disparate citizens of Bangkok orbit each other over the next three decades—sometimes violently, passionately colliding. Through skin-whitening routines, cult conversion, gambling, and sex work, the collection’s characters look for reinvention in a city buckling under the weight of its own modernity.

Wildly imaginative and ambitious, Mai Nardone’s stories reveal the growing discrepancy between Bangkok’s smiling self-image and its ugly underbelly, and, in the process, offer a striking portrait of a city unmade by the whims of global capitalism, in a kingdom caught between this world and the next.

Mai Nardone is a Thai and American writer whose work has appeared in American Short Fiction, Granta, McSweeney’s Quarterly, Ploughshares, and elsewhere. He lives in Bangkok. Welcome Me to the Kingdom is his first book.

“Welcome Me to the Kingdom transports readers to a Thailand that is gritty and lush, spangled and crumbling, aching with grit and ecstasy. Luck and want drive intertwined characters across a landscape that pulsates with life lived under unforgiving sun, and Mai Nardone is a writer with an atlas straight to the heart. I did not want to put this book down and neither will you.”—C Pam Zhang, bestselling author of How Much of These Hills Is Gold

“With cool precision, Mai Nardone steers us down the dark waterways of Bangkok and the darker waterways of human desire. Glittering, deft, and devastating, this is a tangle of stories you’ll gladly be ensnared by. I could not be more excited that Southeast Asian literature counts a writer like Nardone among its ranks.”—Violet Kupersmith, author of Build Your House Around My Body

“A kaleidoscopic vision of Thailand as deep as it is broad. Muay Thai fighters, sex workers, family kitchens, territorial volunteer medics: If no one is saved, no one is exactly lost, either. In the precisely detailed lives of his characters, Nardone unearths real truths, both painful and uplifting, and with his singular prose leaves us wanting more.”—Kawai Strong Washburn, author of Sharks in the Time of Saviors

“Astonishing. Relentless. Mai Nardone’s interlocking stories of modern urban Thailand showcase spectacularly riveting settings and characters as they navigate desire, desperation, and survival.”—Frances Cha, author of If I Had Your Face

“Revelatory, unflinching, and gorgeously written . . . Mai Nardone’s debut peers deep into the lives of Bangkok’s street kids, sex workers, sex tourists, and the privileged bicultural, biracial, and often accidental beneficiaries of colonialism. Rarely does a work portray those clinging to the lower rungs of the socioeconomic ladder—and those guarding their position at the top—with such grace, nuance, and insight.”—Jonathan Escoffery, author of If I Survive You

“In Nardone’s elegant debut collection, characters seek love, belonging, and a means of survival in Bangkok. With assured prose and an appreciation for the details of everyday life, the author evokes a city that is merciless, crowded, and alienating. . . . Nardone’s knack for cataloging the many ways in which life can disappoint is a highlight of each of these nuanced entries. This author has talent to burn.”—Publishers Weekly

“The great migration from the country to the city unfolds the world over. In Nardone’s vibrant first book, these global changes play out in greater Bangkok. . . . The beauty here lies in the granular gradations of class and religious discrimination. . . . Nardone expertly and realistically dramatizes the effects of poverty’s vice-like grip.”—Booklist, starred review