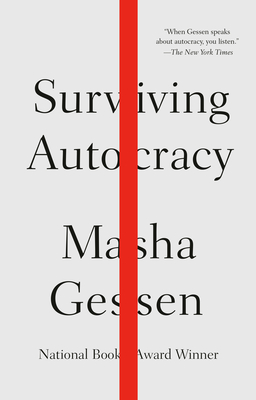 “When Gessen speaks about autocracy, you listen.” —The New York Times

“A reckoning with what has been lost in the past few years and a map forward with our beliefs intact.” —Interview

As seen on MSNBC’s Morning Joe and heard on NPR’s All Things Considered: the bestselling, National Book Award–winning journalist offers an essential guide to understanding, resisting, and recovering from the ravages of our tumultuous times.

This incisive book provides an essential guide to understanding and recovering from the calamitous corrosion of American democracy over the past few years. Thanks to the special perspective that is the legacy of a Soviet childhood and two decades covering the resurgence of totalitarianism in Russia, Masha Gessen has a sixth sense for the manifestations of autocracy—and the unique cross-cultural fluency to delineate their emergence to Americans. Gessen not only anatomizes the corrosion of the institutions and cultural norms we hoped would save us but also tells us the story of how a short few years changed us from a people who saw ourselves as a nation of immigrants to a populace haggling over a border wall, heirs to a degraded sense of truth, meaning, and possibility. Surviving Autocracy is an inventory of ravages and a call to account but also a beacon to recovery—and to the hope of what comes next.

Masha Gessen is the author of eleven other books, including the National Book Award–winning The Future Is History: How Totalitarianism Reclaimed Russia and The Man Without a Face: The Unlikely Rise of Vladimir Putin. A staff writer at The New Yorker and the recipient of numerous awards, including Guggenheim and Carnegie fellowships, Gessen teaches at Bard College and lives in New York City.

“When Gessen speaks about autocracy, you listen.”  —The New York Times

“The Platonic ideal of the anti-Trump Trump book. . . . Offers discomfort and reassurance at once.” —The Washington Post

“An indispensable voice of and for this moment.” —Timothy Snyder, author of On Tyranny

“Urgent . . . Gessen’s credentials as an observer of autocracy are impeccable. . . . Surviving Autocracy  sharpens an edge of disgust lately blunted by relentless use.” —The New York Review of Books

“The fearless Russian American journalist probes the black hole between fact and fantasy in [a] taut, incisive critique.” —O, The Oprah Magazine

“Gessen brings . . . a unique blend of intellect and manifold passions. . . [flashing] the fierce attitude and language of the partisan activist in one moment, returning to the cooler mien of a public intellectual the next.” —NPR

“Brilliant. . . . [Gessen's] clarity is gemlike and refusal to equivocate precious.”  —The Guardian (London)

“A reckoning with what has been lost in the past few years and a map forward with our beliefs intact.” —Interview

“Gessen’s decades-long experience covering the resurgence of totalitarianism in Russia puts them in a unique position to help Americans understand what is happening to the United States under President Donald Trump. . . . Gessen shows us that having the language to understand what is happening is the first step to surviving, and ultimately resisting, an autocratic future.” —The Nation

“It’s hard to imagine someone more poised to write a book called Surviving Autocracy than Masha Gessen. . . . It’s a crucial book for our times.” —The New York Observer

“A stark wake-up call; to those who are looking for what happens now, Gessen’s notes on how we need to rebuild the concept of a ‘we’ in our time are warm and moving, a light of hope that these years can be survived.” —Lit Hub

“A blistering appraisal. . . . Surviving Autocracy isn’t merely important reading for anyone who plans to cast a vote in that election, it’s essential.” —Shelf Awareness

“A brisk, trenchant account . . . . Gessen’s meticulous research and familiarity with the political and cultural history of post-Soviet Russia lend her arguments an authority lacking in other takedowns of Trump. Liberals looking to make sense of what they’re up against in the 2020 elections should consider this a must-read.” —Publishers Weekly (starred review)

“A handbook for an age in which egomania is morphing into autocracy at warp speed. . . . Belongs on the shelf alongside Timothy Snyder’s On Tyranny and Amy Siskind’s The List as a record of how far we have fallen. Gessen is a Suetonius for our time, documenting the death of the old America while holding out slim hope for its restoration.” —Kirkus Reviews (starred review)

“Gessen’s is a clarion voice in the darkness, offering a sobering but sharp-witted analysis of how American society has changed under Trump. . . . [their] rallying cry is a vital and pressing reminder of what's at stake.” —Booklist (starred review)