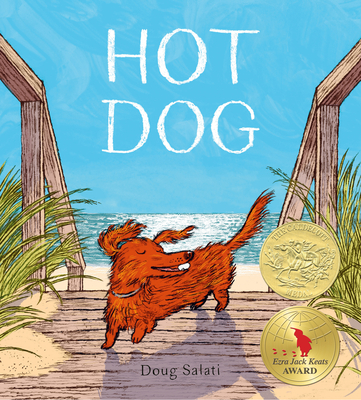 WINNER OF THE 2023 CALDECOTT MEDAL • This glowing and playful picture book features an overheated—and overwhelmed—pup who finds his calm with some sea, sand, and fresh air. Destined to become a classic!

This hot dog has had enough of summer in the city! Enough of sizzling sidewalks, enough of wailing sirens, enough of people's feet right in his face. When he plops down in the middle of a crosswalk, his owner endeavors to get him the breath of fresh air he needs. She hails a taxi, hops a train, and ferries out to the beach.

Here, a pup can run!

With fluid art and lyrical text that have the soothing effect of waves on sand, award-winning author Doug Salati shows us how to find calm and carry it back with us so we can appreciate the small joys in a day.

DOUG SALATI is the critically acclaimed creator of the 2023 Caldecott Medal-winning picture book, Hot Dog. He is also the illustrator of Tomie dePaola's In a Small Kingdom and Matthew Farina's Lawrence in the Fall, an Ezra Jack Keats Honor Book, which the Wall Street Journal described as a "handsome excursion." Doug graduated from the Illustration as Visual Essay master’s program at the School of Visual Arts in 2014 and was a 2015 Sendak Fellow. His illustration work has been recognized by 3x3 Illustration, American Illustration, and the Society of Illustrators. He lives and works in New York City.

★ "Entirely delightful; a breath of fresh air from start to finish." —The Horn Book, starred review