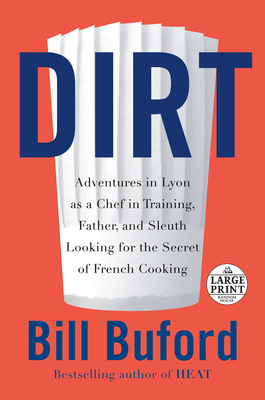 By Bill Buford
$31.00
Not In Store / Available To Order (allow for shipping time to bookstore or direct-to-home)

“You can almost taste the food in Bill Buford’s Dirt, an engrossing, beautifully written memoir about his life as a cook in France.” —The Wall Street Journal

What does it take to master French cooking? This is the question that drives Bill Buford to abandon his perfectly happy life in New York City and pack up and (with a wife and three-year-old twin sons in tow) move to Lyon, the so-called gastronomic capital of France. But what was meant to be six months in a new and very foreign city turns into a wild five-year digression from normal life, as Buford apprentices at Lyon’s best boulangerie, studies at a legendary culinary school, and cooks at a storied Michelin-starred restaurant, where he discovers the exacting (and incomprehensibly punishing) rigueur of the professional kitchen.

With his signature humor, sense of adventure, and masterful ability to bring an exotic and unknown world to life, Buford has written the definitive insider story of a city and its great culinary culture.

Bill Buford is the author of Heat and Among the Thugs. He has received a Marshall Scholarship, a James Beard Award, and the Comune di Roma’s Premio Sandro Onofri for narrative reportage. For eighteen years, Buford lived in England, and was the founding editor of the literary magazine Granta and the founding publisher of Granta Books. He moved to the United States in 1995 to join The New Yorker, where he has been the fiction editor, a staff writer, and a regular contributor. In 2008, he moved with his family to Lyon, France, and lived there for five years. He was born in Baton Rouge, Louisiana, educated at University of California, Berkeley, and King’s College, Cambridge, and now lives in New York City with his wife, the wine educator and writer Jessica Green, and their twin sons.

"This book may well be an even greater pleasure than its predecessor. Moving himself, his wife and their two young boys to Lyon, Buford sets out, with characteristically self-deprecating humor, not merely to learn the techniques of French cuisine, but to understand its essence . . . Most enjoyable are the apprenticeships in which he sets out to master the five mother sauces, bake the perfect baguette and construct the same misleadingly named 'duck pie' . . . Delightful, highly idiosyncratic." —Lisa Abend, The New York Times Book Review

"I heartily recommend Bill Buford's Dirt . . . blazingly entertaining . . . Buford again proves himself to be a relentless reporter and a self-deprecating guide . . . As his title suggests, it's not just the fanatical dedication and meticulously exacting prep. This deliciously salty chronicle, loamy with culinary history and profiles of the great chefs, is worth digging into." —Heller McAlpin, NPR

"A welcome reminder of simpler times . . . Buford's writing is filled with humor and heart . . . He unveils the importance of understanding a city in order to better prepare its dishes . . .[and] underlines a deeply resonant tenet of life: the value of community." —Annabel Gutterman, TIME

"As with good cookery, no shortcuts are taken in Dirt. When Buford picks up a subject — be it bread or language or culinary history or Italian versus French food or the nature of Lyon — that subject is simmered until every tendon has softened. This is a big book that, like an army, moves entire divisions independent of one another. Watching Buford choose a topic for scrutiny is like watching an enormous bodybuilder single out one muscle, on the mountain range of his or her arms, for a laser-focused burn . . . He has a smart, literate, sly voice on the page . . . There is an excellent history of cooking in Lyon, with Fernand Point and Paul Bocuse at its molten center . . . I admire this book enormously; it’s a profound and intuitive work of immersive journalism." —Dwight Garner, The New York Times

"You can almost taste the food in Bill Buford’s Dirt, an engrossing, beautifully written memoir about his life as a cook in France . . . Buford brings a novelistic approach to his story; he is both observer and participant. He’s an entertaining, often comical, raconteur . . . His descriptions of his new city are vivid and evocative . . . humorously self-deprecating . . . Buford has another goal besides training in a French kitchen: to investigate the history and origins of that country’s cooking and its links to Italian cuisine." —Moira Hodgson, The Wall Street Journal

"At a moment when the thought of food is always percolating, [Dirt] actually presents an opportunity to examine what it means, exactly, to be an eater . . .  There are the usual comic abasements. They spring from Lyon itself, a rough-and-tumble town where fights and vandalism and drunken delinquency appear to be common . . . The juxtaposition between this nasty, brutish world and the civilizational peak that cuisine represents is part of a broader tension—between the rough and the refined, the rustic and the haute—that lies at the heart of cooking, and particularly French cooking. Buford shows us both . . . [He] has extended the old adage, You are what you eat, to something broader, encompassing history, culture, the world: We are what we eat. That notion has never rung truer." —Ryu Spaeth, The New Republic

"[Buford] delves into the controversial origins of French cuisine and restaurants, drawing unflinching portraits of past and present luminaries like culinary school founder Paul Bocuse himself. He pursues origins of dishes, sauces, and their ingredients, even participating in the stark grittiness of butchering a pig and learning that in France the best, most coveted flavors come from the earthiest animal organs. An inside look into haute cuisine." —Mark Knoblauch, Booklist (Starred)

“Pure pleasure. Masterfully written. If you care at all about food, about writing, about obsessive people with a sense of adventure, you have to read this book. It is, in a word, wonderful.” —Ruth Reichl, former editor of Gourmet and author of Save Me the Plums

"If you gobbled up Buford’s 2006 book Heat like a bowl of fabulous pasta, you’ll lap up this new volume like a vat of vichyssoise." —Bethanne Patrick, The Washington Post

“Buford delivers a vivid and often laugh-out-loud account of the tribulations, humblings, and triumphs he and his family endured in the five years they lived in France . . . . [He] is a delightful narrator, and his stories of attending a pig slaughter, befriending the owner of a local bakery, and becoming gradually accepted by the locals are by turns funny, intimate, insightful, and occasionally heartbreaking. It’s a remarkable book, and even readers who don’t know a sabayon from a Sabatier will find it endlessly rewarding.” —Publishers Weekly (Starred Review)

"An ebullient, entertaining memoir of life in Lyon . . . [Buford] describes in mouthwatering detail the many dishes he cooked and ate and the charming restaurants the family visited. A lively, passionate homage to fine food." —Kirkus Reviews

"A funny, irreverent and obsessive account of his five-year odyssey to discover everything about French food . . . This book doesn’t offer any recipes, per se, but if perused closely, readers can find instructions for assembling perhaps the grandest concoction of them all: a life well and fully lived, seasoned with curiosity, perseverance and humor—and a dash of adventure." —Alison Hood, BookPage

"There’s plenty for food lovers here, but the book is also a satisfying and envy-inspiring travelogue." —Joumana Khatib, The New York Times ("11 Books to Watch For in May")

"An antidote to confining apartment walls and the daily tedium of my own pedestrian meals . . . [Buford] is knowledgeable, quick and funny—and Dirt is a work of cultural, historical and gastronomical depth that reads like an action memoir . . . He truly took me to the heart of French cuisine." —Eleanor Beardsley, NPR

"Dirt has the unsurprising effect of making you hungry." —Drew Hart, The Arts Fuse

"A hilarious and humbling journey into the intimidating world of haute French cuisine . . .  Reveals the ugly truth about the vituperative culture of apprenticeship in the French kitchen, complete with pervasive bullying, humiliation and acts of physical and emotional abuse . . . Frequently funny and always candid." —Frank Brasile, Shelf Awareness for Readers

“Bill’s ability to fully immerse himself in a foreign place, seemingly at the drop of a dime, is always a sight to behold. With Dirt, Bill dives deep into the unforgiving kitchen culture of Lyon and expresses what it’s truly like to be a cook in this legendary food city.” —Marcus Samuelsson

“As a young cook, I dreamed of one day working in the formidable French kitchens depicted in Dirt, but I never got the chance. Now, after reading this unprecedented inside account from one of the greatest writers of his generation, I'm convinced I actually did. Bill’s latest is required reading for anyone with a love of history, good eating, and masterful storytelling.” —David Chang, restauranteur, broadcaster, and author

"There’s plenty for food lovers here, but the book is also a satisfying and envy-inspiring travelogue."—Joumana Khatib, The New York Times

“Bill Buford is an enthusiast of the highest order. His deep dive into Lyonnais cuisine is a detective story, a love story, and an act of bare-knuckled reverence. It’s earthy, brainy and delicious.” —Pamela Druckerman, author of Bringing Up Bébé: One American Mother Discovers the Wisdom of French Parenting

“This well and vividly written paean to Lyonnaise cuisine is insightful, incisive, and informative. From the amazing creativity of Michel Richard to the strict discipline of the Institut Bocuse, from the brutal hierarchy of La Mére Brazier to the making of bread in Lyon and Savoy, Bill Buford weaves a tale as smooth as a pike quenelle and as rich as a Bresse chicken in cream sauce. Alternatively buoyant, humorous and thoughtful, Dirt is a very enjoyable feast." —Jacques Pépin, chef, author, teacher, and co-host of “Julia and Jacques at Home”

“A thrilling tale of adventure, family, and great cooking inside some of the world’s most influential and iconic kitchens, from the Institut Paul Bocuse to La Mère Brazier.” —Eric Ripert, Chef & Co-owner Le Bernardin , and author of 32 Yolks

“Bill Buford's Dirt—his memoir of an apprenticeship in the unforgiving temples of French cuisine in Lyon—is a chomping, romping, savoury tour de force: by turns hilarious (often at his own expense); and seriously thought provoking about our relationship with cooking and appetite. Rabelais would have loved it. You finish it stuffed and groggy with happy illumination but as with every great feast, wanting even more!” —Simon Schama, historian and author of nineteen books, including Rough Crossings

“In Dirt, Bill Buford talks his way into the cooking schools, bakeries, and chefs’ kitchens of Lyon—in French, yet—while staying (mostly) in his family’s good graces. The result is a book to drool for. Magnifique!” —Mary Norris, author of Between You and Me: Confessions of a Comma Queen and Greek to Me

"Buford spent five years cooking his way through the famed kitchens of Lyon, France, in an attempt to answer the question: why is French food so damn good? The answer, perhaps, lies in the book’s title (spoiler alert), but the journey to get there is a delicious and eye-opening one." —Plate Magazine ("Spring’s Best Food Books")

"Dirt is a memoir about French cuisine, but it's also about family, work, obsession, perfectionism, and what happens when you actually do that crazy thing you've always wanted to do."
—Men's Health

"A warm and funny and very delicious story about a man late in life falling in love with cooking . . . Buford [is] an energetic, exquisite writer . . . Once he arrives in Lyon for the serious instruction
Dirt has really hit its stride, tasty and Dickensian in its characterizations and also ridiculous."
—John Freeman, Lit Hub ("Lit Hub's Most Anticipated Books of 2020")

"Buford illustrates just how difficult rising through the ranks of restaurant kitchens can be, even for classically trained young chefs—especially when those chefs are women or non-white . . . Much of the humor here comes from anecdotes about Buford’s surprisingly resilient young family . . . One wonders if Buford will again upend his family’s life to embark on another international culinary adventure. If so, readers will be eager to pack up and follow along."
—Norah Piehl, Bookreporter