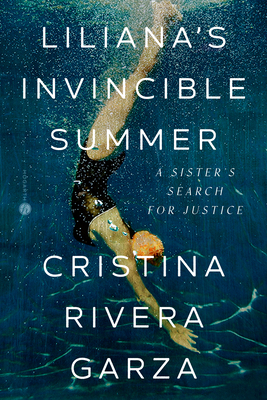 A haunting, unforgettable memoir about a beloved younger sister and the painful memory of her murder, from “one of Mexico’s greatest living writers” (Jonathan Lethem).

September 2019. Cristina Rivera Garza travels from her home in Texas to Mexico City, in search of an old, unresolved criminal file. “My name is Cristina Rivera Garza,” she wrote in her request to the attorney general, “and I am writing to you as a relative of Liliana Rivera Garza, who was murdered on July 16, 1990.” It’s been twenty-nine years. Twenty-nine years, three months, and two days since Liliana was murdered by an abusive ex-boyfriend—and Cristina knows there is only a slim chance of recovering the file. And yet, inspired by feminist movements across the world and enraged by the global epidemic of femicide and intimate partner violence, she embarks on a path toward justice. Liliana’s Invincible Summer is the account—and the outcome—of that extraordinary quest.

In luminous, poetic prose, Rivera Garza tells a singular yet universally resonant story: that of a spirited, wondrously hopeful young woman who tried to survive in a world of increasingly normalized gendered violence. Following her decision to recover her sister’s file, Rivera Garza traces the history of Liliana’s life, from her early romance with a handsome but possessive and short-tempered man, to that exhilarating final summer of 1990 when Liliana loved, thought, and traveled more widely and freely than she ever had before.

Using her remarkable talents as an acclaimed scholar, novelist, and poet, Rivera Garza collected and curated evidence—handwritten letters, police reports, school notebooks, interviews with Liliana’s loved ones—to render and understand a life beyond the crime itself. Through this remarkable and genre-defying memoir, Rivera Garza confronts the trauma of losing her sister and examines from multiple angles how this tragedy continues to shape who she is—and what she fights for—today.

Cristina Rivera Garza is the award-winning author of The Taiga Syndrome and The Iliac Crest, among many other books. A recipient of the MacArthur Fellowship and the Sor Juana Inés de la Cruz Prize, Rivera Garza is the M. D. Anderson Distinguished Professor in Hispanic Studies, and director of the PhD program in creative writing in Spanish at the University of Houston.

“Cristina Rivera Garza wanted to shed light on the life of her sister, killed 30 years ago. Her book, part of a larger call for justice by women in Mexico, helped locate the suspect. . . . [Liliana's Invincible Summer] is the record of a woman who, against the odds, refuses to be forgotten.”—The New York Times

“Liliana’s Invincible Summer is a blueprint of one woman’s murder, but it is also the story of hundreds of thousands of women throughout the globe. I was shaken and alerted by Cristina Rivera Garza’s investigation into her own grief. It has inspired me to speak up as she has bravely done.”—Sandra Cisneros

“Cristina Rivera Garza has written something almost miraculous: not a cold case file or true crime story, but an attempt to recover Liliana’s life, her spark, her youth, taken away with such cruelty. This book is a revelation.”—Mariana Enriquez, author of Our Share of Night

“Reading this astounding, lyrical, and brilliant book will open your heart and break it, leaving you more vulnerable to both love and rage.”—Julie Carr, author of Real Life

“Cristina Rivera Garza has done the unimaginable work of stepping into her twenty-year-old sister’s footprints as she meticulously recounts Liliana’s time on this earth. The heart-filled writing of this genre-bending book is a political act, a manifesto against patriarchy and the ‘straightjacket of machismo.’”—Javier Zamora, author of Solito

“This is sisterhood as mystery, yearning, and ghosted affection. Cristina was as close to her sister in life as she was distant from her after Liliana’s tragic and untimely death. It is this unreconcilable divide, and Cristina’s efforts to bridge it, that makes this book a haunting testimony.”—Quiara Alegría Hudes, author of My Broken Language

“Reimagining what archives can do, Cristina Rivera Garza excavates police reports, diary accounts, interviews, and memory, compiling a memoir where nothing escapes grief’s investigation—not love, injustice, the self, sisterhood, state violence, or the pleasure of women.”—Hafizah Augustus Geter, author of The Black Period

“Cristina Rivera Garza is a masterful storyteller. Though deeply personal, this work is also a strong protest against the high number of femicides in Mexico and the absence of justice.”—Jennifer Clement, author of Gun Love

“Rivera Garza interweaves startling facts and statistics (an average of 10 women are killed per day in Mexico) with lyrical meditations on her family life [and] explores ‘how patriarchy deforms and hurts men, as much as it does women.’ This piercing remembrance hits home.”—Publishers Weekly

“A moving, heart-wrenching memoir as well as an unflinching appraisal of the widespread violence against women in Mexico.”—Kirkus Reviews