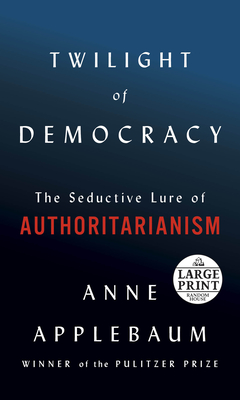 By Anne Applebaum
$27.00
Email orders@greenlightbookstore.com for information about this item.

Do we take it for granted or is it just boredom? By "it" I mean democracy. Anne Applebaum's Twilight of Democracy traces within our expansive world's past and present the cyclical tendency of leadership to toss away morality and common sense, by embracing a base ignorance to consolidate power for perceived loyalty to their nationalistic ideals.   Or maybe it isn't a cyclical tendency of doing away with democracy, but it is always never ending with seemingly infinite cadre of options to create polarization especially with the advent of social media by "grown ups" in the room. I hope you will embrace this title as a time capsule of our current clusterf**k.

NATIONAL BESTSELLER • "How did our democracy go wrong? This extraordinary document ... is Applebaum's answer." —Timothy Snyder, author of On Tyranny

The Pulitzer Prize–winning historian explains, with electrifying clarity, why elites in democracies around the world are turning toward nationalism and authoritarianism.

From the United States and Britain to continental Europe and beyond, liberal democracy is under siege, while authoritarianism is on the rise. In Twilight of Democracy, Anne Applebaum, an award-winning historian of Soviet atrocities who was one of the first American journalists to raise an alarm about antidemocratic trends in the West, explains the lure of nationalism and autocracy. In this captivating essay, she contends that political systems with radically simple beliefs are inherently appealing, especially when they benefit the loyal to the exclusion of everyone else. Elegantly written and urgently argued, Twilight of Democracy is a brilliant dissection of a world-shaking shift and a stirring glimpse of the road back to democratic values.

ANNE APPLEBAUM’s 2018 Atlantic article “A Warning from Europe” inspired this book and was a finalist for a National Magazine Award. After seventeen years as a columnist at The Washington Post, Applebaum became a staff writer at The Atlantic in 2020. She is the author of three critically acclaimed and award-winning histories of the Soviet Union: Red Famine, Iron Curtain, and Gulag, winner of the Pulitzer Prize.

“The book to buy for insight into what Trump's rise and rule really mean—here and abroad—for democracy in our time."
—Ron Elving, NPR

“Applebaum’s historical expertise and knowledge of contemporary Europe and the United States illuminate what is eternal and distinctive about the political perils facing us today  . . . Twilight of Democracy offers many lessons on the long-standing struggle between democracy and dictatorship. But perhaps the most important is how fragile democracy is: Its survival depends on choices made every day by elites and ordinary people.”
—Sheri Berman, Washington Post

“An often sobering, sometimes shocking, but never despairing account of the rise of authoritarianism in the West.”
—Los Angeles Review of Books

“Anne Applebaum is a leading historian of communism and a penetrating investigator of contemporary politics. Here she sets her sights on the big question, one with which she herself has been deeply engaged in both Europe and America: How did our democracy go wrong? This extraordinary document, written with urgency, intelligence, and understanding, is her answer.”
—Timothy Snyder, author of On Tyranny

“Friendships torn. Ideals betrayed. Alliances broken. In this, her most personal book, a great historian explains why so many of those who won the battles for democracy or have spent their lives proclaiming its values are now succumbing to liars, thugs, and crooks. Analysis, reportage, and memoir, Twilight of Democracy fearlessly tells the shameful story of a political generation gone bad.”
—David Frum, author of Trumpocracy and Trumpocalypse

“Critically important for its muscular, oppositionist attack on the new right from within conservative ranks—and for the well-documented warning it embodies. Applebaum’s views are especially welcome because she is a deliberate thinker and astute observer rather than just the latest pundit or politico . . . A knowledgeable, rational, necessarily dark take on dark realities.”
—Kirkus Reviews (starred)

"In crisp, elegant prose . . . [Applebaum] describes the emotional power of conspiracy theories and of simple narratives that encourage national unity against a common enemy, even if that enemy is often more imagined than real."
—Christian Science Monitor