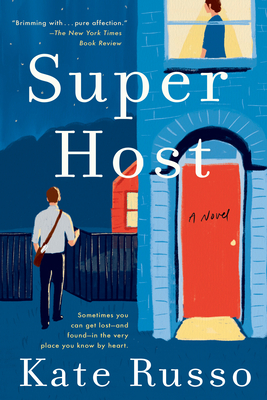 “What a delightful surprise! Instead of the usual woe-is-me, angsty, life’s-got-me-down book, we have a fusty, recently divorced, middle-aged British artist who’s forced to rent his house out on an Airbnb equivalent to make ends meet. But instead of feeling sorry for himself, he takes time to reassess things and slowly turns his life around. Told with great empathy and nice, droll humor, this is one we need for these crazy times.”
— Pete Mock, McIntyre's Fine Books, Pittsboro, NC

A deeply funny and shrewdly observed debut novel about being lost in the very place you know by heart.

Bennett Driscoll has had better days. A Turner Prize-nominated artist, Bennett was once a rising star. Now, at age fifty-five, his wife has left him, he hasn't sold a painting in two years, and his gallery wants to stop selling his work, claiming they'll have more value retrospectively...when he's dead. So, left with a large West London home and no income, he's forced to move into his artist's studio in the back garden and list his house on the popular vacation rental site, AirBed.

A stranger in his own home, with his daughter, Mia, off at art school, and any new relationships fizzling out at best, Bennett has trouble finding purpose in his day-to-day. That all changes when three different guests—lonely American Alicia; tortured artist Emma; and cautiously optimistic divorcée Kirstie—unwittingly unlock the pieces of himself that have been lost to him for too long.

Kate Russo grew up in Maine but now divides her time between there and the United Kingdom. She has an MFA in painting from the Slade School of Fine Art, and exhibits in both the UK and the United States.

“Russo’s clever debut evokes a time when travel wasn’t so fraught and strangers could get close enough to learn something about themselves.” —The New York Times Book Review (Editors’ Choice)

“Here’s that rare thing: a wise, literary novel that is also funny as hell...the perfect antidote to this time of being shut in at home. Super Host gives me hope for the future, when we can all open our doors, and our hearts, once more.” —Jennifer Finney Boylan, Buzzfeed

"[Russo] is a visual artist herself, and she handles Bennett's relationship problems and his artistic resurgence confidently, with wit, wisdom and humor." —Minneapolis Star Tribune

"[A] candid and captivating portrait of middle age...[and] what it truly means to take a new chance at life." —PureWow

“Get ready to smile….[A] sweet story and the perfect antidote to the chaos that’s been 2021.” –the Skimm

"A droll and endearing debut novel…Impeccably dry-witted dialogue and a twinkling, upscale urban backdrop against which sympathetic characters ache for a connection." —Portland Press Herald

“Funny, sharp, and artistic…A wonderful book flanked with irony, perversity, Rear Window voyeurism, and women who understand the task of reinvention, Super Host is a case study of what we talk about when we talk about success.” —Lit Hub

“[A] witty, enjoyable debut…Russo is a formidable talent, and readers will be eager to see what she does next.” —Publishers Weekly

“Kate Russo’s novel hasn’t yet been compared to Eleanor [Oliphant Is Completely Fine], but it should be. The character at its heart…is the perfect blend of impossible and beloved, and the story is handled with a mix of wise humor and compassion.” —BookPage

“A painter herself, Russo makes the act of creating art come alive, while effectively limning her characters in this incisive study of contemporary life.” –Library Journal

“In Russo’s charming and poignant debut…the author writes with warm sympathy and humor. A treat for fans of Nick Hornby and Tom Perrotta.” —Kirkus Reviews

“[A] pleasantly quirky debut…Bennett is a comfortable character to get to know, as is the London through which he ambles.” —Booklist

"Smart, enjoyable, clever but earnest contemporary comic novel about a likeable, seemingly hapless – but resourceful as it turns out – failing artist who sublets his quite apartment to fairly well off nuisances.” —Shawangunk Journal

"Super Host isn't just a charming, compulsively readable, romantically suspenseful novel about a lonely man who gets himself emotionally enmeshed with a series of short-term tenants. Kate Russo's wise and funny debut also has a lot to say about the neighborhoods of London, the frustrations and satisfactions of making art, and the courage it takes to start over in the middle of your life. It's a joy from start to finish." —Tom Perrotta

“I gobbled up Super Host, Kate Russo’s smart, funny, and surprising first novel. She writes with such a generous and insightful eye about love, loneliness and artistic ambition, and has redrawn the lines that connect people in fiction through the most modern and unlikely of settings, the home share.” –Jess Walter

"This is the compulsively readable story of Bennett, a once-famous artist now divorced and impoverished, who lives in his garden studio and spies on his tenants through the windows. Super Host is hilarious, and touching, too; Kate Russo is a terrific storyteller." —Claire Messud

"Kate Russo's delightful novel is deft, fast, and startling. I could have sworn I was right there, and I never wanted to leave." —Luis Alberto Urrea