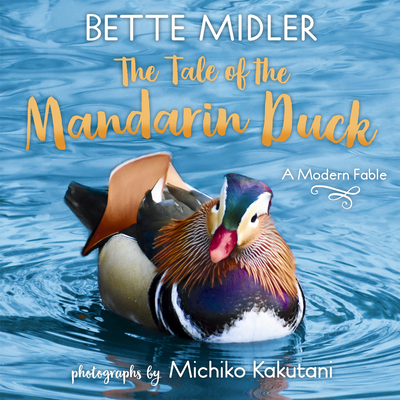 NEW YORK TIMES BESTSELLER • Inspired by the real-life rainbow-colored Mandarin Duck who appeared in New York’s Central Park in 2018, this modern fable by Bette Midler celebrates the connections people make with each other and the world around them.

How do you get people to appreciate what is right in front of them? In The Tale of the Mandarin Duck, it takes a mysterious, beautiful duck and a clear-eyed kid to point out the obvious! Bette Midler’s distinctive voice joins striking photos of the real duck by Michiko Kakutani and charming black-and-white drawings by Joana Avillez. This book will have readers of all ages coming back to visit the fantastical interpretation of New York City and its odd ducks—both feathered and human.

An afterword by Ms. Kakutani adds details to the facts behind this one-of-a-kind story of the Mandarin Duck.

Bette Midler is an American actress, singer, and comedienne. She remembers the time before cell phones. Visit her on Twitter and Instagram.

Michiko Kakutani is a Pulitzer Prize–winning literary critic and the former chief book critic of The New York Times. She is the author of the New York Times bestseller The Death of Truth.

“Midler has crafted a loving ode to the people of New York…. A celebration of beauty—in a city, in its people, and in an extraordinary avian visitor.” –Kirkus Reviews, starred review

“This story is rooted in reality yet slyly surreal…. There is a crackling creative synergy among the book’s collaborators, each of whom contributes bountifully to the storytelling.” –Publishers Weekly, starred review