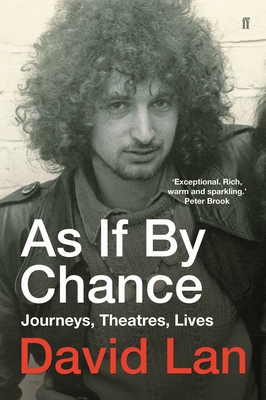 A family day at the beach. There's a song, an argument, a dash across the white sand & into the high rolling waves. We're in Cape Town and David Lan is ten years old. Cut to 1969 and, visiting London fresh out of high school, he interviews theatre luminaries Sybil Thorndike, Tom Stoppard, Trevor Nunn, Paul Schofield before heading home to join the South African army. Now it's 1999. We're at the Young Vic where David is interviewed to be artistic director, a job he'd do for eighteen years, ensuring it's flowering into a great world theatre. There's a redesign to be imagined, money to be raised, shows to be staged. And when the doors reopen in 2006 we meet the extraordinary artists he draws in: Ivo Van Hove, Jude Law, Richard Jones, Gillian Anderson, Patrice Chereau, Katy Mitchell, Stephen Daldry, the Isango Ensemble, Yerma, The Jungle, The Inheritance. We travel to Peter Brook's Paris, to Iceland in pursuit of a circus Romeo and Juliet, to Lithuania in search of his great grandparents, to a refugee camp in Congo with Joe Wright and Chiwetel Ejiofor, to Broadway for the Tony Awards. There's spirit mediums in the Zambezi Valley, Chekhov's Yalta, Luc Bondy's Vienna, making a BBC film in Angola, rehearsing a new play in Israel/Palestine. Along the way, memories constantly rise to the surface: the Royal Court in the 70s and 90s, school plays, his parents' complicated marriage. Woven through it all is his decades long relationship with playwright Nicholas Wright. At times hilarious and always deeply felt, David Lan's deft travels evoke a wildly varied life in theatre as well as a unique theatre of life.

David Lan was artistic director of the Young Vic 2000-2018. His plays, operas and musicals have been produced around the world and have won multiple awards including the Tony, Drama Desk, Olivier, Evening Standard, Critics' Circle, South Bank Show (theatre and opera), Drama League and Obie. His first book was the ethnography Guns and Rain: Guerillas and Spirit Mediums in Zimbabwe. In 2018 he received the Laurence Olivier 2018 Special Award and the Critics' Circle Special Award for Services to Theatre. He lives in London and is currently Theatre Associate at the Brooklyn Academy of Music in New York.