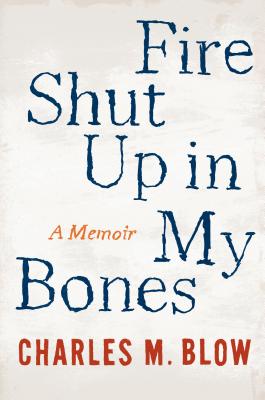 By Charles M. Blow
Email orders@greenlightbookstore.com for information about this item.
Out of Print / Unavailable

“Mirroring so many of the memories, feelings, and imaginings from my own childhood in small-town Arkansas, Blow's moving memoir tells the pitiless Southern experience of a black man coming of age in Louisiana in a world and time when the legacy of slavery's grip is slipping away ever so slowly but still leaves its searing sting. An important book.”
— Chris Crawley, That Bookstore In Blytheville, Blytheville, AR

A gorgeous, moving memoir of how one of America's most innovative and respected journalists found his voice by coming to terms with a painful past


New York Times columnist Charles M. Blow mines the compelling poetry of the out-of-time African-American Louisiana town where he grew up -- a place where slavery's legacy felt astonishingly close, reverberating in the elders' stories and in the near-constant wash of violence.


Blow's attachment to his mother -- a fiercely driven woman with five sons, brass knuckles in her glove box, a job plucking poultry at a nearby factory, a soon-to-be-ex husband, and a love of newspapers and learning -- cannot protect him from secret abuse at the hands of an older cousin. It's damage that triggers years of anger and searing self-questioning.


Finally, Blow escapes to a nearby state university, where he joins a black fraternity after a passage of brutal hazing, and then enters a world of racial and sexual privilege that feels like everything he's ever needed and wanted, until he's called upon, himself, to become the one perpetuating the shocking abuse.


A powerfully redemptive memoir that both fits the tradition of African-American storytelling from the South, and gives it an indelible new slant.

CHARLES M. BLOW has been columnist at the New York Times since 2008, and he appears regularly on MSNBC, CNN, Fox News, the BBC, Al Jazeera, and HBO. Blow lives in Brooklyn with his three children and was named 11th most influential African American in the world by The Root magazine.

"Fire Shut Up in My Bones is a luminous memoir that digs deep into territory I've longed to read about in black men's writing: into the horror of being submerged in a vast drowning swirl of racial, spiritual, and sexual complexity, only to somehow find one's self afloat, though gasping for breath, and then, at long last and at great cost, swimming. I believe both Ancestors and Descendants will cheer."
—ALICE WALKER

"Some truths cannot be taught, only learned through stories - profoundly personal and startlingly honest accounts that open not only our eyes but also our hearts to painful and complicated social realities. Charles Blow's memoir tells these kinds of truths. No one who reads this book will be able to forget it. It lays bare in so many ways what is beautiful, cruel, hopeful and despairing about race, gender, class and sexuality in the American South and our nation as a whole. This book is more than a personal triumph; it is a true gift to us all."
—MICHELLE ALEXANDER, author of The New Jim Crow

"Fire Shut Up in My Bones is a profoundly moving memoir of Charles Blow's coming of age as a black boy in the Deep South; of the way his sensitive and gifted intelligence slowly begins to kindle, becoming ablaze with wonder at the world and his place in it. Above all, this is the story of a courageously honest man arriving at his decision to 'stop running like the river . . . and just be the ocean, vast, deep, and exactly where it was always meant to be.' Blow has written a classic memoir of a truly American childhood."
—HENRY LOUIS GATES

"Fire Shut Up in My Bones is a heart-stopping memoir: a portrait of the artist—the exceptionally talented columnist Charles Blow—that also puts a searing face on all sorts of abstractions, like poverty, race, sexuality, and a human persistence sometimes known as courage. So particular yet gracefully timeless is this evocation of childhood that I sometimes felt as if I were reading an update of To Kill a Mockingbird, in which the poor, black protagonist’s moral education destines him to endure, and prevail."
—DIANE McWHORTER, author of  Carry Me Home

"Stunning...Blow's words grab hold of you like a fever that shakes you up at first but eventually leads you to a place of healing."
—Essence


"[Fire Shut Up In My Bones] is the most compelling read of the fall and the kind of book that will inspire you to turn off the TV and curl up in front of the fire instead."
—BET.com

"Page by elegant page, Charles Blow has constructed an eloquent and courageous memoir that explains why black and white is never just that—whether it comes to race or the rich, conflicted stew of childhood memory."
—GWEN IFILL, moderator, Washington Week, and co-anchor, PBS NewsHour

"Brave and powerful . . .a singular look at a neglected America."
—Publishers Weekly

"When you finish Charles Blow's mesmerizing memoir, you will cry. And you will better understand poverty, the south, racism, sex, fear, rage, and love. Then you will miss being in his authorial grip. Then you will start reading this stunning book again."
—LAWRENCE O'DONNELL

"Fire Shut Up in My Bonescloaks its gut-wrenching honesty in lyrical prose."
—Goodreads
"Unabashedly honest."
—Mother Jones
"Blow's genius lies in his ability to touch us, as the best writing always does."
—The Root
"Ferocious...will leave a lasting impression on every reader that picks up this book...There's no greater urge for a writer than to write his or her own story, and Blow accomplishes that feat withheartbreaking beauty."
—Writer's Bone

"Charles Blow is a fellow Louisianan. His memoir, Fire Shut Up in My Bones, warmed and tickled my bones. The memoir takes its title from a passage from the book of Jeremiah in the Old Testament: 'His word is in my heart like a fire, a fire shut up in my bones. I am weary of holding it in; indeed, I cannot.' I am supremely glad Blow can no longer hold his own story inside and has chosen to share it with us. From a small town kid growing up in extreme poverty in the segregationist Deep South to a columnist at The New York Times, Blow is an absolute treasure and his powerful story deserves to be heard."
—DONNA BRAZILE

"Fire Shut Up in My Bones is a masterwork of remarkable power, authenticity and honesty. Blow writes with passion about coming of age in a rural Louisiana community suffering from the ravages of racism and poverty. His riveting memoir frankly takes on sexuality, religion and social hierarchy in the African-American community and reveals the inner soul of one of America's most intriguing public intellectuals."
—DARREN WALKER, president of the Ford Foundation

"Fire Shut Up in My Bonesis an instant classic of American letters. Charles Blow's eloquent memoir is haunted by surges of pain and suffering that rarely escape into the open with such searing honesty. Blow's brilliant and self-critical narrative contains truths which no American can afford to ignore, and which few black men have dared to tell. In this irresistible story of the journalist as a besieged boy and determined young man, one of the nation's foremost social critics bares his soul and speaks his mind with redemptive clarity."
—MICHAEL ERIC DYSON

"I missed him the moment I read the last word. Charles Blow's delicate, dangerously vulnerable journey from boyhood to manhood to himself, takes hold of you like a long lost friend you don't ever want to let out of your sight again. Fire Shut Up In My Bones finally, exquisitely gives voice to the complex and gloriously diverse Black American male identity. A modern memoir that reads like a great classic novel, it's the kind of masterful storytelling that divides folks into those who have read and those who have not. I am forever grateful to be among the privileged haves."
—MICHAELA ANGELA DAVIS

"Charles Blow has given us an enormous gift with this penetrating and honest memoir. I could not put it down, riveted by the journey, with no idea where it was taking me but deeply illuminated by the end. Blow opens up his life, growing up in the Deep South, and shines a light on the complexities and diversity of sexual identity in a way that can only help advance the march toward equality."
—MICHELANGELO SIGNORILE, author of Queer in America

"It takes a great deal of courage to divulge your deepest secrets to the world, but Charles Blow shares the story of his personal journey from a rare place of honesty, especially for such a celebrated public figure. In Fire Shut Up in My Bones, Blow has constructed a beautifully crafted, timeless story of coming of age in the face of betrayal, adversity, and self-doubt. I expect this memoir will not only resonate today but will also enlighten and inspire readers for years to come."
—KEITH BOYKIN

"This book is an elegant heartache. Charles Blow's story is by no means an easy one, but he tells it beautifully, a gorgeous read about a gorgeous little boy striving to become himself amidst a world discouraging him from doing so. Blow does an astonishing job of intertwining hardship with humor, pain alongside pleasure, revealing his signature talent for prose that is transcendently poetic at the same time it's grounded in microscopic details of life and insight."
—SALLY KOHN

"Charles Blow is one of the most astute literary voices we have in America today. His is an eye that sees inside our communities, inside our world, inside himself, in a way that not only makes us think, but permits us to feel, to be, to change."
—KEVIN POWELL