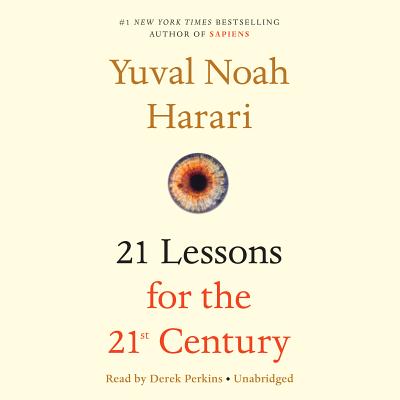 #1 NEW YORK TIMES BESTSELLER • In Sapiens, he explored our past. In Homo Deus, he looked to our future. Now, one of the most innovative thinkers on the planet turns to the present to make sense of today’s most pressing issues.

“Fascinating . . . a crucial global conversation about how to take on the problems of the twenty-first century.”—Bill Gates, The New York Times Book Review

NAMED ONE OF THE BEST BOOKS OF THE YEAR BY FINANCIAL TIMES AND PAMELA PAUL, KQED

How do computers and robots change the meaning of being human? How do we deal with the epidemic of fake news? Are nations and religions still relevant? What should we teach our children?

Yuval Noah Harari’s 21 Lessons for the 21st Century is a probing and visionary investigation into today’s most urgent issues as we move into the uncharted territory of the future. As technology advances faster than our understanding of it, hacking becomes a tactic of war, and the world feels more polarized than ever, Harari addresses the challenge of navigating life in the face of constant and disorienting change and raises the important questions we need to ask ourselves in order to survive.

In twenty-one accessible chapters that are both provocative and profound, Harari builds on the ideas explored in his previous books, untangling political, technological, social, and existential issues and offering advice on how to prepare for a very different future from the world we now live in: How can we retain freedom of choice when Big Data is watching us? What will the future workforce look like, and how should we ready ourselves for it? How should we deal with the threat of terrorism? Why is liberal democracy in crisis?

Harari’s unique ability to make sense of where we have come from and where we are going has captured the imaginations of millions of readers. Here he invites us to consider values, meaning, and personal engagement in a world full of noise and uncertainty. When we are deluged with irrelevant information, clarity is power. Presenting complex contemporary challenges clearly and accessibly, 21 Lessons for the 21st Century is essential reading.

“If there were such a thing as a required instruction manual for politicians and thought leaders, Israeli historian Yuval Noah Harari’s 21 Lessons for the 21st Century would deserve serious consideration. In this collection of provocative essays, Harari . . . tackles a daunting array of issues, endeavoring to answer a persistent question: ‘What is happening in the world today, and what is the deep meaning of these events?’”—BookPage (top pick)

Born in Haifa, Israel, in 1976, YUVAL NOAH HARARI received his PhD from the University of Oxford in 2002, and is currently a lecturer at the Department of History, the Hebrew University of Jerusalem. Published in 2014, Sapiens: A Brief History of Humankind has become an international hit and is published in nearly 40 languages worldwide. It was listed on the Sunday Times bestseller list for over six months in paperback, and was a New York Times top 10 bestseller. In 2016, Harari published Homo Deus: A Brief History of Tomorrow, which was also a widely hailed international bestseller. He lectures around the world on the topics explored in his books and articles, and has written for newspapers such as the Guardian, Financial Times, The Times and the Wall Street Journal. He also offers his knowledge and time to various organizations and audiences on a voluntary basis.

“The human mind wants to worry. This is not necessarily a bad thing—after all, if a bear is stalking you, worrying about it may well save your life. Although most of us don’t need to lose too much sleep over bears these days, modern life does present plenty of other reasons for concern: terrorism, climate change, the rise of A.I., encroachments on our privacy, even the apparent decline of international cooperation. In his fascinating new book, 21 Lessons for the 21st Century, the historian Yuval Noah Harari creates a useful framework for confronting these fears. While his previous best sellers, Sapiens and Homo Deus, covered the past and future respectively, his new book is all about the present. The trick for putting an end to our anxieties, he suggests, is not to stop worrying. It’s to know which things to worry about, and how much to worry about them. . . . Harari is such a stimulating writer that even when I disagreed, I wanted to keep reading and thinking. . . . [Harari] has teed up a crucial global conversation about how to take on the problems of the twenty-first century.”—Bill Gates, The New York Times Book Review

“If there were such a thing as a required instruction manual for politicians and thought leaders, Israeli historian Yuval Noah Harari’s 21 Lessons for the 21st Century would deserve serious consideration. In this collection of provocative essays, Harari, author of the critically praised Sapiens and Homo Deus, tackles a daunting array of issues, endeavoring to answer a persistent question: ‘What is happening in the world today, and what is the deep meaning of these events?’ . . . Harari makes a passionate argument for reshaping our educational systems and replacing our current emphasis on quickly outdated substantive knowledge with the ‘four Cs’—critical thinking, communication, collaboration and creativity. . . . Thoughtful readers will find 21 Lessons for the 21st Century to be a mind-expanding experience.”—BookPage (top pick)

“Magnificently combining historical, scientific, political, and philosophical perspectives, Harari . . . explores twenty-one of what he considers to be today’s ‘greatest challenges.’ Despite the title’s reference to ‘lessons,’ his tone is not prescriptive but exploratory, seeking to provoke debate without offering definitive solutions. . . . Within this broad construct, Harari discusses many pressing issues, including problems associated with liberal democracy, nationalism, immigration, and religion. This well-informed and searching book is one to be savored and widely discussed.”—Publishers Weekly (starred review)

“A highly instructive exploration of ‘current affairs and . . . the immediate future of human societies.’ Having produced an international bestseller about human origins and avoided the sophomore jinx writing about our destiny, Harari proves that he has not lost his touch, casting a brilliantly insightful eye on today’s myriad crises, from Trump to terrorism, Brexit to big data. . . . [In] twenty-one painfully astute essays, he delivers his take on where our increasingly ‘post-truth’ world is headed. Human ingenuity, which enables us to control the outside world, may soon re-engineer our insides, extend life, and guide our thoughts. Science-fiction movies get the future wrong, if only because they have happy endings. Most readers will find Harari’s narrative deliciously reasonable, including his explanation of the stories (not actually true but rational) of those who elect dictators, populists, and nationalists. His remedies for wildly disruptive technology (biotech, infotech) and its consequences (climate change, mass unemployment) ring true, provided nations act with more good sense than they have shown throughout history. Harari delivers yet another tour de force.”—Kirkus Reviews (starred review)