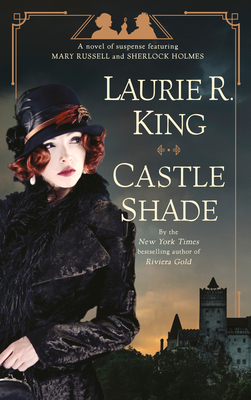 This is book number 17 in the Mary Russell and Sherlock Holmes series.

A queen, a castle, a dark and ageless threat—all await Mary Russell and Sherlock Holmes in this chilling adventure.

The queen is Marie of Roumania: the doubly royal granddaughter of Victoria, Empress of the British Empire, and Alexander II, Tsar of Russia. A famous beauty who was married at seventeen into Roumania’s young dynasty, Marie had beguiled the Paris Peace Conference into returning her adopted country’s long-lost provinces, singlehandedly transforming Roumania from a backwater into a force.

The castle is Bran: a tall, quirky, ancient structure perched on high rocks overlooking the border between Roumania and its newly regained territory of Transylvania. The castle was a gift to Queen Marie, a thank-you from her people, and she loves it as she loves her own children.

The threat is . . . well, that is less clear. Shadowy figures, vague whispers, the fears of girls, dangers that may be only accidents. But this is a land of long memory and hidden corners, a land that had known Vlad the Impaler, a land from whose churchyards the shades creep.

When Queen Marie calls, Mary Russell and Sherlock Holmes are as dubious as they are reluctant. But a young girl is involved, and a beautiful queen. Surely it won’t take long to shine light on this unlikely case of what would seem to be strigoi?

Laurie R. King is the award-winning, bestselling author of sixteen Mary Russell mysteries, five contemporary novels featuring Kate Martinelli, and many acclaimed stand-alone novels such as Folly, Touchstone, The Bones of Paris, and Lockdown. She lives in Northern California, where she is at work on her next Mary Russell mystery.

“King smoothly slips in fascinating historical details about the life of Marie of Roumania, all the while keeping the plot galloping along at high speed. This is a treat for old fans and newcomers alike.”—Publishers Weekly

“Highly recommend for historical mystery fans who have followed the series, as well as readers looking for historical heroines with agency such as Maisie Dobbs, Bess Crawford, or Phryne Fisher.”—Library Journal (starred review)

“Each book in the Russell and Holmes series is a treat. . . . The novels are extremely atmospheric. . . . Kudos to Laurie King for keeping the legend [of Sherlock Holmes] alive with such entertaining novels, and Mary Russell keeping him on his toes.”—Mystery & Suspense Magazine

“As per the customary quality of her work, Laurie R. King has imbued Castle Shade with all the creativity and intelligence deserving of a series that both immortalizes an ingenious, feminist heroine of her own making and continues the legacy of the astonishingly observant and eminently logical London gentleman whose name has become synonymous with detection.”—BookTrib

“[Castle Shade] has everything you want in a book. . . . A good mystery, fun characters and a story you don’t want to put down.”—Red Carpet Crash