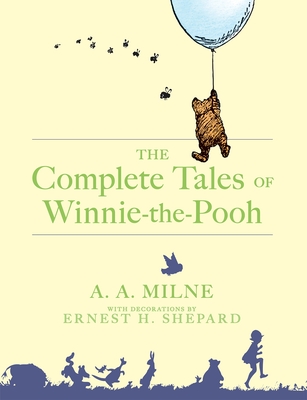 This exquisite, deluxe edition contains the complete illustrated texts of both Winnie-the-Pooh and The House at Pooh Corner. In full-color and featuring a satin ribbon marker, it is the perfect gift and a cornerstone of every family's bookshelf.

Since 1926, Winnie-the-Pooh and his friends—Piglet, Owl, Tigger, Kanga, Roo, and the ever doleful Eeyore—have endured as the unforgettable creations of A. A. Milne, who wrote two books of Pooh’s adventures for his son, Christopher Robin, and Ernest H. Shepard, who lovingly gave them shape through his iconic and beautiful illustrations.

These characters and their stories are timeless treasures of childhood that continue to speak to all of us with the kind of freshness and heart that distinguishes true storytelling.

This deluxe volume brings both Pooh stories—Winnie-the-Pooh and The House at Pooh Corner—together in one beautiful, full-color edition. The texts are complete and unabridged, and all of the illustrations, each gloriously recolored, are included. Elegant yet simple, whimsical yet wise, this classic edition is a book to savor and treasure.

The perfect gift for holiday, to welcome a new baby, or for your favorite collector and book lover.

A. A. Milne was born in England in 1882, the third and youngest son of London schoolteachers. As a boy he wrote verses, parodies, and short humorous pieces for his school’s paper. He went on to study at Cambridge.

In 1903 he left school to write. Before long he was supporting himself on his earnings, and became an editor at Punch magazine. In 1913 he married Dorothy de Selincourt. He began his military service in 1915 in Europe. During this time he wrote three plays, all of which were produced on the London stage.

Christopher Robin Milne was born in 1920. It was Christopher’s toy bear, pig, donkey, tiger, and kangaroo that became the inspiration for the famous Pooh books.

A. A. Milne wrote more plays, a novel, his autobiography, and political nonfiction, although he is best remembered for Winnie-the-Pooh, The House at Pooh Corner, When We Were Very Young, and Now We Are Six. Milne died in 1956.

Ernest H. Shepard was born in 1879 in London. His mother, who died when Ernest was ten, encouraged her son to paint and draw, and there was never any doubt that Ernest would be an artist. He was later awarded medals for his work and was named a Landseer Scholar. In 1901 his first picture exhibited in the Royal Academy.

In 1903 he married Florence Chaplin. The Shepards had two children—Graham, who was killed in World War II, and Mary, who later illustrated the Mary Poppins books. Shepard served in Europe during the war. Afterward he joined the editorial board at Punch, where he met A. A. Milne.

Shepard’s drawings appear in many books for adults and children. Among them is Kenneth Grahame’s The Wind in the Willows. Shepard died in 1976.