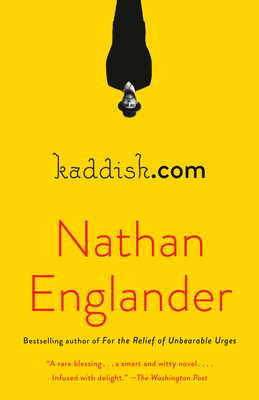 When his father dies, it falls to Larry—the secular son in a family of Orthodox Brooklyn Jews—to recite the Kaddish, the Jewish prayer for the dead, every day for eleven months. But to the horror and dismay of his sister, Larry refuses, imperiling the fate of his father’s soul. To appease her, he hires a stranger through a website called kaddish.com to say the prayer instead—a decision that will have profound, and very personal, repercussions. Irreverent, hilarious, and wholly irresistible, Nathan Englander’s tale of a son who makes a diabolical compromise brilliantly captures the tensions between tradition and modernity.

Nathan Englander is the author of the story collections For the Relief of Unbearable Urges, an international best seller, and What We Talk About When We Talk About Anne Frank, and the novels The Ministry of Special Cases and Dinner at the Center of the Earth. His books have been translated into twenty-two languages. He is the recipient of a Guggenheim Fellowship, a PEN/Malamud Award, the Frank O’Connor International Short Story Award, and the Sue Kaufman Prize from the American Academy of Arts and Letters, and was a finalist for the Pulitzer Prize in 2013. His play, The Twenty-Seventh Man, premiered at the Public Theater in 2012. He is Distinguished Writer in Residence at New York University and lives in Brooklyn, New York, with his wife and daughter.

“Tender, wry and entertaining. . . . Englander’s trademark humor is on display, but most striking and moving about kaddish.com is the unabashed sweetness of a son’s longing for a father.” —The New York Times Book Review

“Satirical, inventive, and brimming with gallows humor, this novel’s whip-smart look at the clash of religious and secular worlds showcases Englander at his best.” —Esquire

“A wonderfully nimble performance. . . .  kaddish.com smuggles profound moral questions under the dress of its light and diverting story.” —The Wall Street Journal

“[A] poignant coming-to-understanding about grief, the meaning of tradition, and love between fathers and sons.” —Minneapolis Star Tribune

“[A] delight of a novel. . . . A marvelous comic fable. . . . Englander’s expansive imagination is such that he can convincingly write the part of a secular Jewish hipster and a born-again Jew - and do it with the Yiddish inflections of a Borscht Belt comedian.” —Associated Press

“Tantalizing. . . . Englander’s prose is always sprightly. He makes it easy to turn the page.” —The Forward

“With his usual wit and irreverence . . . Nathan Englander spins out a tale. . . . There’s still a good deal of tongue-in-cheek humor in the story that follows . . . but it’s also an earnest look at belief, at ritual, at mourning, and at family ties.” —Vanity Fair

“kaddish.com is funny but also profound, a saga of spiritual transformation. . . . Amid the chaos in which we all live nowadays, [the novel] is a bright light in a dark world.” —Jewish Journal

“[There is] a hum of suspense behind this slim tale that belies its subject.” —Vulture

“Humorous and moving. . . . Englander is a master at displaying the way a single decision, made in a private moment, can stay with us for the rest of our lives and haunt our future.” —Bookforum

“Englander is mischievously hilarious, nightmarish, suspenseful, inquisitive, and deliriously tender in this concentrated tale of tradition and improvisation, faith and love.” —Booklist