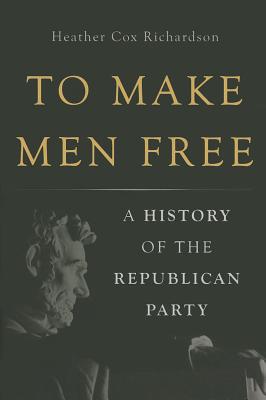 When Abraham Lincoln helped create the Republican Party on the eve of the Civil War, his goal was to promote economic opportunity for all Americans, not just the slaveholding Southern planters who steered national politics. Yet, despite the egalitarian dream at the heart of its founding, the Republican Party quickly became mired in a fundamental identity crisis. Would it be the party of democratic ideals? Or would it be the party of moneyed interests? In the century and a half since, Republicans have vacillated between these two poles, with dire economic, political, and moral repercussions for the entire nation.

In To Make Men Free, celebrated historian Heather Cox Richardson traces the shifting ideology of the Grand Old Party from the antebellum era to the Great Recession, revealing the insidious cycle of boom and bust that has characterized the Party since its inception. While in office, progressive Republicans like Teddy Roosevelt and Dwight Eisenhower revived Lincoln's vision of economic freedom and expanded the government, attacking the concentration of wealth and nurturing upward mobility. But they and others like them have been continually thwarted by powerful business interests in the Party. Their opponents appealed to Americans' latent racism and xenophobia to regain political power, linking taxation and regulation to redistribution and socialism. The results of the Party's wholesale embrace of big business are all too familiar: financial collapses like the Panic of 1893, the Great Depression in 1929, and the Great Recession in 2008. With each passing decade, with each missed opportunity and political misstep, the schism within the Republican Party has grown wider, pulling the GOP ever further from its founding principles.

Expansive and authoritative, To Make Men Free is a sweeping history of the Party that was once America's greatest political hope -- and, time and time again, has proved its greatest disappointment.

Heather Cox Richardson is a Professor of History at the University of Massachusetts, Amherst. Author of West from Appomattox, The Greatest Nation of the Earth, and The Death of Reconstruction, she lives in Winchester, Massachusetts.

Sean Wilentz, author of The Rise of American Democracy: Jefferson to Lincoln
“At its Lincolnian best, the G.O.P. has been not just grand but good. In To Make Men Free, the eminent political historian Heather Cox Richardson superbly brings the Republican Party's history to life, while offering sharp and often surprising interpretations of its rises and declines, when it heeded Lincoln's legacy and when it did not.”

Eric Rauchway, Professor of History, University of California, Davis
“Heather Cox Richardson tells a great story, full of fascinating figures, of how the Republican Party has enjoyed extraordinary political success in a country full of poor people, while doing much to serve the rich. It's a vital chapter in the history of American conservatism.”

T.J. Stiles, Pulitzer Prize-winning author of The First Tycoon: The Epic Life of Cornelius Vanderbilt
“In To Make Men Free, one of our most admired historians takes on one of the most important topics of our past and present: the 160-year story of the Republican Party. From Abraham Lincoln to George W. Bush, from Radical Republicans to Movement Conservatives, Heather Cox Richardson recounts the GOP's dramatic history with unimpeachable insights and crisp, vivid writing. How did the anti-slavery party become the party of the Solid South? How did the anti-trust party of Theodore Roosevelt become the party of Wall Street and the Club for Growth? In this brisk account, Richardson make sense of a twisting tale that shapes our lives every day.”

Ari Kelman, Bancroft Prize-winning author of A Misplaced Massacre: Struggling Over the Memory of Sand Creek
“Heather Cox Richardson has written a much-needed book: a comprehensive and balanced history of the Republican Party. The prose is engaging, the research is deep, the argument is persuasive; To Make Men Free is the work of a major talent at the top of her craft.”

Publishers Weekly
“[An] opinionated history...Richardson aptly ends by wondering if the modern Republican Party ‘will find a way to stay committed to the ideals of its founders.'”

Ruy Teixeira, co-author of The Emerging Democratic Majority
“Heather Cox Richardson's concise history of the Republican Party shows how a party that once saw government as the guarantor of equal opportunity for all morphed into today's intransigently anti-government, anti-tax, anti-regulation GOP. Richardson convincingly demonstrates that the Republican Party has oscillated throughout its history between equal opportunity and protection of property rights as its lodestar. Those seeking clues to how the GOP might evolve in the future will want to read this important book.”

New York Times Book Review
“A readable and provocative account of the many paths that Republicans have taken to their current state of confusion.”

Los Angeles Times
“The most comprehensive account of the GOP and its competing impulses... an important contribution to understanding where we are today.”

Washington Post
“The book offers a lively survey of Republican politics in all its diversity, from the ‘transformational presidency' of Abraham Lincoln (to borrow a 21st-century term) to the conservative ascendancy of Ronald Reagan.”

Washington Spectator
“A rich portrait of the thinking and times of Abraham Lincoln and those closest to him in the founding of the Republican Party... perceptive and persuasive.... Readers of Richardson's history of the GOP will come away with a good sense of the complex path that led the party to the abnegation of the Lincoln legacy.”

Kirkus
“Richardson makes a bold, pertinent argument.... A hard-hitting study that will surely resonate with ongoing attempts to regenerate the GOP.”