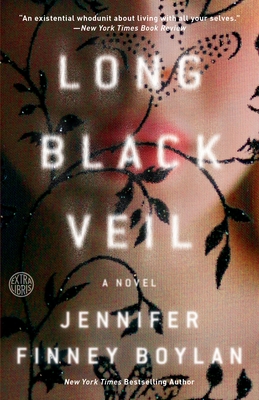 At the center of this thought-provoking, suspenseful novel is Judith Carrigan, a transgender woman reckoning with a tragic incident in her past. She could serve as an exonerating witness for an old friend, but to do so she'd have to annihilate the carefully drawn line between her pre- and post-transition selves. As much a meditation on identity as it is a page-turny mystery.

Picked by Sarah in Fort Greene

For fans of Donna Tartt and Megan Abbott, a novel about a woman whose family and identity are threatened by the secrets of her past, from the New York Times bestselling author of She's Not There

On a warm August night in 1980, six college students sneak into the dilapidated ruins of Philadelphia’s Eastern State Penitentiary, looking for a thrill. With a pianist, a painter and a teacher among them, the friends are full of potential. But it’s not long before they realize they are locked in—and not alone. When the friends get lost and separated, the terrifying night ends in tragedy, and the unexpected, far-reaching consequences reverberate through the survivors’ lives. As they go their separate ways, trying to move on, it becomes clear that their dark night in the prison has changed them all. Decades later, new evidence is found, and the dogged detective investigating the cold case charges one of them—celebrity chef Jon Casey— with murder. Only Casey’s old friend Judith Carrigan can testify to his innocence.

But Judith is protecting long-held secrets of her own – secrets that, if brought to light, could destroy her career as a travel writer and tear her away from her fireman husband and teenage son. If she chooses to help Casey, she risks losing the life she has fought to build and the woman she has struggled to become. In any life that contains a “before” and an “after,” how is it possible to live one life, not two?

Weaving deftly between 1980 and the present day, and told in an unforgettable voice, Long Black Veil is an intensely atmospheric thriller that explores the meaning of identity, loyalty, and love. Readers will hail this as Boylan’s triumphant return to fiction.

JENNIFER FINNEY BOYLAN, author of fourteen books, is the inaugural Anna Quindlen Writer in Residence at Barnard College of Columbia University in the City of New York and is Special Advisor to the president of Colby College in Maine. She has been a contributor to the Op-Ed page of the New York Times since 2007; in 2013 she became Contributing Opinion Writer for the page. Jenny also serves on the Board of Trustees of the Kinsey Institute for Research on Sex, Gender, and Reproduction. She is the national co-chair of the Board of Directors of GLAAD, the media advocacy group for LGBT people worldwide, and serves as a consultant to several television series. A novelist, memoirist, and short-story writer, she is also a nationally known advocate for civil rights. Jenny has appeared on the Oprah Winfrey Show on four occasions; Live with Larry King twice; the Today show; the Barbara Walters Special; and NPR's Marketplace and Talk of the Nation. She has also been the subject of documentaries on CBS News' 48 Hours and The History Channel. She lives in New York City and in Belgrade Lakes, Maine, with her wife, Deedie, and her two sons, Zach and Sean.

Finalist for the 2018 LAMBDA Literary Awards

"An existential whodunit about living with all your selves...To the author, the prison is more than a powerful setting, it's also a powerful symbol for the closeted life she once led."
— Marilyn Stasio, New York Times Book Review

"Jennifer FinneyBoylan’s atmospheric thriller Long Black Veil follows a travel writer tangled up in a cold case that has come back to haunt her decades later."
—Time magazine, Pick of the Month

“Long Black Veil is … character-driven like literary fiction; it deals with somber themes like murder and shifting identity, but it's suffused with comic moments; it features an ensemble cast yet extends Boylan's exploration of the deepest recesses of trans experience.”
— Vice

“Boylan’s Long Black Veil is more than just an engrossing whodunit. It is a highly charged work of imagination, and a thriller with fully formed characters, grappling with truth and identity.”
— National Book Review

“Boylan’s gifts are all on full display, much to our benefit. Relationships are dynamic and rich; the portrayal of Judith’s journey is particularly powerful for a multitude of reasons.  The narrative is laden with twists and a kinetic pacing. The words are funny and poignant and borderline addictive. And there’s a thoughtfulness throughout…. that lingers in a most effective manner…. Boylan’s latest is fast-paced and concise and exquisitely-written—a beautiful and captivating stampede.”
— Maine Edge

"Both a murder mystery and a contemplation of what it means to be true to yourself even when extreme measures seem necessary... It is a tale that is equal parts thrilling, scary, funny and touching, and not many authors can hit all those marks successfully in one piece of work."
— The Oklahoman

"A darkly suspenseful, fast-paced and nuanced character-driven novel with gothic undertones, Long Black Veil explores gender and identity, the loyalty of friends and family, and the price demanded by the present for the long-held secrets of the past."
— ShelfAwareness

“[A] madcap thriller full of hidden identities…And embedded in the whodunit is a heartwarming midlife love story, in which hard-won candor, tenacity, and a generous sense of humor are the most saving of graces.”
— Publishers Weekly, starred review

“Boylan, who has reaped praise in recent years with memoirs exploring her transgender experience, doesn’t miss a storytelling beat in her first novel as she blends atmospheric elements of a Shirley Jackson–like haunting, a secret-laden murder tale featuring an ensemble cast, and an eye-opening glimpse of the complex choices transgender people face. This crime debut is certain to attract a genre-blurring following, but recommendations to fans of Erin Kelly’s The Poison Tree and Donna Tartt’s The Secret History are sure bets.”
— Booklist, starred review

“This is a nifty little setup for a thriller, and Boylan uses the murder mystery as a frame for interrogating our ideas about identity in ways that are both thoughtful and darkly comic. A trans woman, Boylan is best known as a memoirist and an activist, and the trans character in this novel adds a layer of intrigue and complexity…. Boylan is skilled at creating intriguing, three-dimensional characters; even those characters who prove to be inconsequential emerge as real, unique individuals…. It’s hard to stop reading as these well-crafted characters confront middle age while confronting the defining event of their youth.”
— Kirkus

"This is Jennifer Finney Boylan's best book.  It's one of the most eloquent pleas for empathy and moral imagination I've ever encountered.”
— RICHARD RUSSO, Pulitzer Prize-winning author of Nobody’s Fool

"In the tradition of Donna Tartt, Jennifer Finney Boylan has crafted a thriller that's intellectual, existential, and compulsively readable.  If change is the only constant in life, how much can a person reinvent himself and still be the same?  Long after the last page is turned, you will be thinking about the nature of identity, the pull of the past, and whether you can ever outrun the person you used to be.”
– JODI PICOULT, New York Times bestselling author of Small Great Things and Leaving Time

“Jennifer Finney Boylan rewards her fans with a riveting whodunit. The plot shapeshifts along with the unforgettable characters--including a woman whose family could be dismantled by her long-buried secrets. All this is rendered in Jenny's signature hilarious, wise and wise-assed prose. Bravo, Boylan, bring us another one!”
– MARY KARR, New York Times bestselling author of Liar’s Club, Lit and Cherry