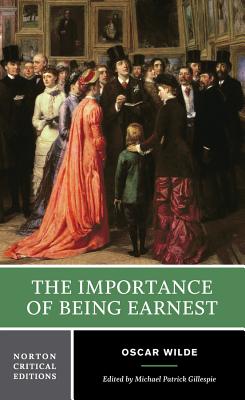 By Oscar Wilde, Michael Patrick Gillespie (Editor)
Email orders@greenlightbookstore.com for information about this item.
Out of Print / Unavailable

The text of this Norton Critical Edition of The Importance of Being Earnest is the established three-act version. Originally in four acts, Wilde shortened it to three at the urging of George Alexander, the owner of the St. James Theatre and first actor to play Jack Worthing. The play is accompanied by explanatory annotations and by an appendix of excised portions.

"Backgrounds" includes essays on Wilde and the 1890s by prominent cultural critics Joseph Donohue, Regenia Gagnier, and Karl Beckson. "Reviews and Reactions" collects contemporary responses to The Importance of Being Earnest, among them George Bernard Shaw’s famous dissenting view and the American assessment by H. F.

A Chronology and Selected Bibliography are also included.

Oscar Wilde (1854–1900) was born and raised in Dublin, Ireland. Wilde studied at Trinity College in Dublin and at Magdalen College in Oxford, England, before settling down in London and having a long, successful career as a poet, playwright, and author. Wilde is best known for his novel The Picture of Dorian Gray and for his satirical play The Importance of Being Earnest.

Michael Patrick Gillespie is Professor of English at Florida International University. He is the author of Oscar Wilde and the Poetics of Ambiguity, Branding Oscar Wilde, The Aesthetics of Chaos: Nonlinear Thinking and Contemporary Literary Criticism, Inverted Volumes Improperly Arranged: James Joyce and His Trieste Library, Reading the Book Himself: Narrative Strategies in the Works of James Joyce, The Aesthetics of Chaos, The Myth of an Irish Cinema, James Joyce and the Exilic Imagination, Reading William Kennedy, and Film Appreciation through Genres. His other edited works include the Norton Critical Edition of The Importance of Being Earnest, James Joyce and the Fabrication of an Irish Identity, and Joyce through the Ages: A Non-Linear View.