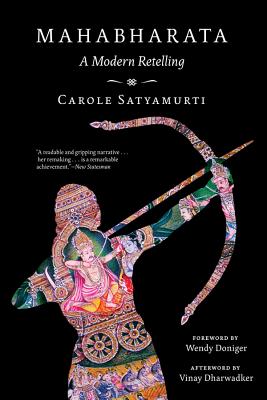 "Astonishing…[Satyamurti’s Mahabharata] brings [the] past alive…as though it were a novel in finely crafted verse." —Vinay Dharwadker

Originally composed approximately two thousand years ago, the Mahabharata tells the story of a royal dynasty, descended from gods, whose feud over their kingdom results in a devastating war. But it contains much more than conflict. An epic masterpiece of huge sweep and magisterial power, “a hundred times more interesting” than the Iliad and the Odyssey, writes Wendy Doniger in the introduction, the Mahabharata is a timeless work that evokes a world of myth, passion, and warfare while exploring eternal questions of duty, love, and spiritual freedom. A seminal Hindu text, which includes the Bhagavad Gita, it is also one of the most important and influential works in the history of world civilization.

Innovatively composed in blank verse rather than prose, Carole Satyamurti’s English retelling covers all eighteen books of the Mahabharata. This new version masterfully captures the beauty, excitement, and profundity of the original Sanskrit poem as well as its magnificent architecture and extraordinary scope.

Carol Satyamurti was a poet and social scientist. She published six collections of poetry, the most recent of which is Countdown. Her work has been widely anthologized and won numerous awards, including first prize in the National Poetry Competition, 1986, and a Cholmondeley Award in 2000. Mahabharata: A Modern Retelling, of which this volume is an abridgment, won the inaugural Roehampton Poetry Prize in 2015.

Wendy Doniger (Ph.D. Harvard University) is Mircea Eliade Distinguished Service Professor of the History of Religions at the University of Chicago. She first trained as a dancer under George Balanchine and Martha Graham and then went on to complete two doctorates in Sanskrit and Indian Studies (from Harvard and Oxford). She has taught at Harvard, Oxford, the School of Oriental and African Studies at the University of London, and the University of California at Berkeley. In 1984 she was elected president of the American Academy of Religion, in 1989 a fellow of the American Academy of Arts and Sciences, in 1996 a member of the American Philosophical Society, and in 1997 president of the Association for Asian Studies. She has been awarded seven honorary degrees, and her book The Hindus: An Alternative History was a finalist for the National Book Critics Circle Award.

Vinay Dharwadker (University of Wisconsin-Madison) is the author of Cosmopolitan Geographies: New Locations in Literature and Culture (2001) and a book of poetry, Sunday at the Lodi Gardens: Poems (1994). He is the editor of The Oxford Anthology of Modern Indian Poetry (1994) and The Collected Essays of A. K. Ramanujan (1999), and the translator of a collection of Kabir’s work called Kabir: The Weaver’s Songs (2003).

A remarkable achievement.
— The New Statesman

An exquisitely crafted reminder of the power of the Mahabharata: how riveting a read it is, and how relevant it remains to our times.

A gift to be grateful for. It gives us, as all poetry should, access into a world we did not know or did not know well enough and which henceforth we will visit again and again.
— David Constantine

A spellbinding reading experience and a magisterial achievement.
— Eva Hoffman

Like the Iliad, the Mahabharata has everything: love, war, family, gods, all the beauty and horror of life. I hope Carole Satyamurti’s compelling version will introduce this marvelous epic, still largely unknown in the west, to a whole generation of new readers.

A kind of miracle: a talented English poet has brought alive in blank verse an ancient Sanskrit epic for the contemporary ear and in a language that does not draw attention to itself but captures the weft and warp of the original thrilling tale, including its moral complexity.
— Gurcharan Das