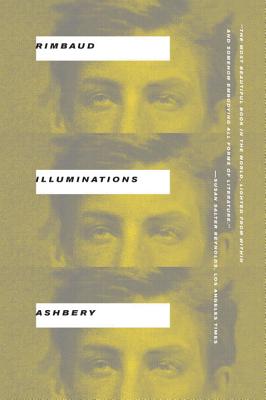 Rimbaud’s prose poems capture the strange space we inhabit: a stillness between utopia and apocalypse, a bored, wavering impatience before the flood. Ashbery’s translation avoids the clunk and flourish of previous versions in favor of recognizing the weirdness of the poems, preserving their crystalline concision and vivid, fantastical images. This book also provides a genealogy of Ashbery’s own poetry, which like Rimbaud, accepts the danger of conveying simple beauty and agency in “this huge city under a sky stained with fire and mud…”

Picked by Michael in Fort Greene

"This may be the most beautiful book in the world, lighted from within and somehow embodying all forms of literature." —Susan Salter Reynolds, Los Angeles Times

The modernist masterpiece that is Arthur Rimbaud’s Illuminations has been given new life with the publication of John Ashbery’s “dazzling” (The Economist) new translation, widely hailed as one of the literary events of the year. Presented with French text in parallel and a preface by its translator, Ashbery’s rendering powerfully evokes the glittering, kaleidoscopic beauty of the original

Unknown beyond the avant-garde at the time of his death in 1891, Arthur Rimbaud has become one of the most liberating influences on twentieth-century culture. Born Jean Nicolas Arthur Rimbaud in Charleville, France, in 1854, Rimbaud’s family moved to Cours d’Orléans, when he was eight, where he began studying both Latin and Greek at the Pension Rossat. While he disliked school, Rimbaud excelled in his studies and, encouraged by a private tutor, tried his hand at poetry. Shortly thereafter, Rimbaud sent his work to the renowned symbolist poet Paul Verlaine and received in response a one-way ticket to Paris. By late September 1871, at the age of sixteen, Rimbaud had ignited with Verlaine one of the most notoriously turbulent affairs in the history of literature. Their relationship reached a boiling point in the summer of 1873, when Verlaine, frustrated by an increasingly distant Rimbaud, attacked his lover with a revolver in a drunken rage. The act sent Verlaine to prison and Rimbaud back to Charleville to finish his work on A Season in Hell. The following year, Rimbaud traveled to London with the poet Germain Nouveau, to compile and publish his transcendent Illuminations. It was to be Rimbaud’s final publication. By 1880, he would give up writing altogether for a more stable life as merchant in Yemen, where he stayed until a painful condition in his knee forced him back to France for treatment. In 1891, Rimbaud was misdiagnosed with a case of tuberculosis synovitis and advised to have his leg removed. Only after the amputation did doctors determine Rimbaud was, in fact, suffering from cancer. Rimbaud died in Marseille in November of 1891, at the age of 37. He is now considered a saint to symbolists and surrealists, and his body of works, which include Le bateau ivre (1871), Une Saison en Enfer (1873), and Les Illuminations (1873), have been widely recognized as a major influence on artists stretching from Pablo Picasso to Bob Dylan.

This is a landscape not only of the imagination, but of an imagination that is still affecting us profoundly.
— Charles Rosen - New York Review of Books