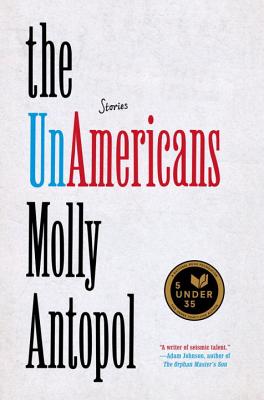 By Molly Antopol
$24.95
Email orders@greenlightbookstore.com for information about this item.

“Antopol has written a pitch-perfect collection of stories that capture the essence of human survival and triumph: a grandmother sharing the tale of her harrowing sewer-line escape from the Nazis and her rescue by a young resistance worker who ultimately becomes her husband; an aspiring actor of Russian descent jailed during the McCarthy era, who is attempting to build a relationship with his son after his prison term is over; another father, this one a struggling, middle-aged adjunct professor, who worries that the play his daughter is producing may expose the secrets of his escape from Czechoslovakia. Each story is a gem to be savored and each demonstrates that a new American talent has emerged.”
— Nancy Simpson-Brice, The Book Vault, Oskaloosa, IA

*Longlisted for the National Book Award * A stunning exploration of characters shaped by the forces of history, the debut work of fiction by Molly Antopol, a 2013 National Book Foundation "5 Under 35" Honoree.

An absentee father, a former dissident from communist-era Prague, needles his adult daughter for details about her newly commissioned play when he fears it will cast him in an unflattering light. An actor, imprisoned during the Red Scare for playing up his communist leanings to get a part with a leftist film director, is shamed by his act when he reunites with his precocious young son. An Israeli soldier, forced to defend a settlement filled with American religious families, still pines for a chance to discover the United States for himself. A young Israeli journalist, left unemployed after America’s most recent economic crash, questions her life path when she begins dating a middle-aged widower still in mourning for his wife. And in the book’s final story, a tour de force spanning three continents and three generations of women, a young American and her Israeli husband are forced to reconsider their marriage after the death of her dissident art-collecting grandmother.


Again and again, Molly Antopol’s deeply sympathetic characters struggle for footing in an uncertain world, hounded by forces beyond their control. Their voices are intimate and powerful and they resonate with searing beauty. Antopol is a superb young talent, and The UnAmericans will long be remembered for its wit, humanity, and heart.

Molly Antopol teaches writing at Stanford University, where she was a recent Wallace Stegner Fellow. A recipient of the National Book Foundation’s 5 Under 35 award, she holds an MFA from Columbia University and lives in San Francisco.

A writer of seismic talent…Not since Robert Stone has a writer so examined the nature of disillusionment and the ways in which newfound hope can crack the cement of failed dreams.
— Adam Johnson, Pulitzer Prize-winning author of The Orphan Master's Son

Beautiful, funny, fearless, exquisitely crafted, and truly novelistic in scope…It's clear we're in the hands of a master storyteller—a writer with the emotional heft of Nicole Krauss, the intellectual depth of Saul Bellow, and the penetrating wit of Philip Roth. This book isn’t simply powerful and important—it's necessary.
— Jesmyn Ward, National Book Award-winning author of Salvage the Bones

Molly Antopol's stories display that wonderful combination of an original voice with settings that are masterfully rendered. A rich collection, a great read.
— Abraham Verghese, author of Cutting for Stone

A brave, generous, and effortlessly smart story collection by a young writer with talent to burn.
— Lauren Groff, author of Arcadia

This is deeply humane fiction, coursing with the heat of a passionate, sympathetic heart.
— Ken Kalfus, author of A Disorder Peculiar to the Country and Equilateral

Allegiances are not always what they seem, in these wonderfully engrossing stories of Old- and New-World Jews cast on the sometimes rough waters of history. Molly Antopol is a vivid chronicler of the good intentions and big misapprehensions of her characters, as we intently watch them try to get it right.
— Joan Silber, author of Fools

An exceptional collection of wide-ranging, powerful, and nuanced stories…You come away with an ache in your soul for all her people and what they were up against, how they triumphed, how they failed, and how they managed, somehow, to endure.
— Peter Orner, author of Last Car Over the Saramore Bridge and Love and Shame and Love

[Antopol] draws the reader to her deeply flawed characters [with] their keen self-awareness, and their consequent ability to act with a semblance of moral, sometimes even selfless, integrity.
— Publishers Weekly

Antopol accomplishes in each of these stories what would take most writers an entire novel to achieve: a fully imagined world.
— Dara Horn, author of A Guide for the Perplexed

The Unamericans is poised to be this year's sensation… the layered riches and historical sweep of its stories make them feel grand, like novels writ small.

In a word: Wow!
— New York Journal of Books

A smart, empathetic, well-crafted first collection—Antopol is a writer to watch.
— Kirkus Reviews

[Will] make you nostalgic, not just for earlier times, but for another era in short fiction. A time when writers such as Bernard Malamud, and Issac Bashevis Singer and Grace Paley roamed the earth.
— Meg Wolitzer - NPR

Outstanding… the stories begin as though the reader is walking into an intimate conversation already underway… [and] the endings are never predictable.
— Sandee Brawarsky - Jewish Weekly