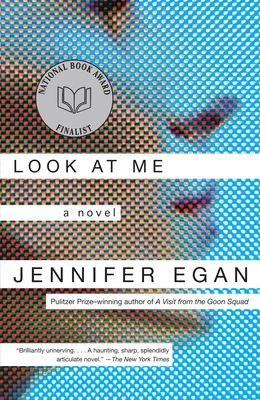 NATIONAL BOOK AWARD FINALIST • In this ambitiously multilayered novel from the bestselling, award-winning author of A Visit from the Goon Squad, a fashion model named Charlotte Swenson emerges from a car accident in her Illinois hometown with her face so badly shattered that it takes eighty titanium screws to reassemble it.

She returns to New York still beautiful but oddly unrecognizable, a virtual stranger in the world she once effortlessly occupied.

With the surreal authority of a David Lynch, Jennifer Egan threads Charlotte’s narrative with those of other casualties of our infatuation with the image. There’s a deceptively plain teenaged girl embarking on a dangerous secret life, an alcoholic private eye, and an enigmatic stranger who changes names and accents as he prepares an apocalyptic blow against American society.

As these narratives inexorably converge, Look at Me becomes a coolly mesmerizing intellectual thriller of identity and imposture.

Jennifer Egan is the author of four novels: A Visit from the Goon Squad, The Keep, Look at Me, The Invisible Circus; and the story collection Emerald City. Her stories have been published in The New Yorker, Harper’s Magazine, GQ, Zoetrope, All-Story, and Ploughshares, and her nonfiction appears frequently in The New York Times Magazine. She lives with her husband and sons in Brooklyn.

“Look at Me is so engrossing, energetic, sharp, and funny, it reminded me of Ralph Ellison’s masterpiece, Invisible Man.” –Maureen Corrigan, Fresh Air (NPR)

“Arresting. . . . Look at Me is the real thing–brave, honest, unflinching. [It] is itself a mirror in which we can clearly see the true face of the times in which we live.” –Francine Prose, The New York Observer

“Egan limns the mysteries of human identity and the stranglehold our image-obsessed culture has on us all in this complicated and wildly ambitious novel.” –Newsweek

“Intriguing. . . . An unlikely blend of tabloid luridness and brainy cultural commentary. . . . The novel’s uncanny prescience gives Look at Me a rare urgency.” –Time

“Egan has created some compelling characters and written provocative meditations on our times. . . . [She] has captured our culture in its edge-city awfulness.” –The Washington Post Book World

“Look at Me is a complicated novel . . . but the questions it raises are worth following a lifetime of labyrinths toward the answers.” –Los Angeles Times

“Ambitious, swiftly paced. . . . Egan writes with such shimmering élan that it’s easy to follow her cast on its journey.” –The Wall Street Journal

“Prescient and provocative. . . . The characters . . . jump from the pages and dare you to care about them. . . . The prose is crisp and precise. . . . The pieces fit together at the end with a satisfying click.” –Philadelphia Inquirer

“Impressive. . . . Few recent books have so eloquently demonstrated how often fiction, in its visionary form, speaks of truth.” –Salon.com

“Look at Me makes us think about our trust in the images that bombard us, and what we give away in the process.” –Chicago Tribune

“Egan’s rich new novel . . . is about bigger things: double lives; secret selves; the difficulty of really seeing anything in a world so flooded with images.” –The Nation

“Stunning. . . . This is more than a story, it’s a thought-world, a novel of ideas brilliantly cloaked in the skin of characters.” –The Sunday Oregonian

“Egan’s take . . . is surreal and profoundly ironic and exaggerated, but it still rings true. . . . Beneath it all, she finds characters worth saving.” –Hartford Courant

“Breathtaking. . . . Combines the tautness of a good mystery with the measured, exquisitely articulated detail and emotional landscape of the most literary of narratives. . . . Sure to leave readers thinking about these very real characters for some time to come.” –BookPage

“An imaginative, well-paced read with serious questions about the elusiveness of meaning inside the gilded cage. Egan has intelligence to burn but plenty of feeling too.” –People

“Part mystery, part cultural critique, [Look at Me] . . . build[s] to a conclusion that is unexpected and disturbing, and mak[es] an incisive statement about our society’s obsession with fame and glamour.” –San Francisco Chronicle

“Riveting. . . . As the book gains momentum, Egan’s writing is both fluid and driven, with wonderful slashes of satire. . . . A remarkable study of our culture . . . and of our palpable need to be known.” –O: The Oprah Magazine

“Egan has created a compelling world. . . . With [her] graceful prose and vivid characterizations, she navigates her plot lines’ churning waters with admirable skill.” –Seattle Weekly

“[A] scintillating inquiry into the complex and profound dynamics of perception. . . . Egan . . . animates a superb cast of intriguing and unpredictable characters, and tells an elegantly structured, emotionally arresting and slyly suspenseful story.” –Newsday

“Intelligent and refreshingly dark, Egan’s eerie tale has the same mesmerizing pull as the culture it skewers.” –Us Weekly

“This masterfully plotted work bears the stamp of a perceptive–if not clairvoyant–writer whose disturbing vision . . . rings all too true.” –SF Weekly

“Egan’s ability to move with ease between sincerity and satire sets Look at Me apart. . . . Her authentic-feeling details give a sense of unusual immediacy.” –Vogue