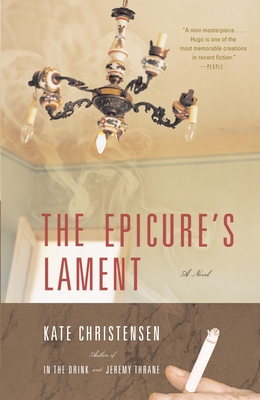 By Kate Christensen
$15.00
Available In Store Now (while supplies last)

Hugo Whittier–failed poet and former kept man–is a wily misanthrope with a taste for whiskey, women, and his own cooking. Afflicted with a rare disease that will be fatal unless he quits smoking, Hugo retreats to his once aristocratic family’s dilapidated mansion, determined to smoke himself to death without forfeiting any of his pleasures. To his chagrin, the world that he has forsaken is not quite finished with him. First, his sanctimonious older brother moves in, closely followed by his estranged wife, their alleged daughter, and his gay uncle. Infuriated at the violation of his sanctum, Hugo devises hilariously perverse ploys to send the intruders packing. Yet the unexpected consequences of his schemes keep forcing him to reconsider, however fleetingly, the more wholesome ingredients of love, and life itself.

Kate Christensen is also the author of the novels IN THE DRINK and JEREMY THRANE. Her essays and articles have appeared in various publications including Salon, Mademoiselle, The Hartford Courant, Elle, and the best-selling anthology THE BITCH IN THE HOUSE. She lives in Brooklyn with her husband.

“ A mini-masterpiece. . . . Hugo is one of the most memorable creations in recent fiction. His story is an exquisite meal served in literary, haute cuisine prose. Discerning palates will savor it.” –People

“Funny and aesthetically playful. . . . Christensen beautifully handles this very male point of view, with a complexity of language and a set of intricate emotions (both hidden and revealed) that recall Nabokov’s Lolita.” –Elle

“Christensen gives a virtuoso performance, tossing off perfect sentences seemingly at random, delivering them with a sneer that makes them more delicious.” –Time

“Deliciously wicked black comedy. . . . The Epicure’s Lament is a razor dissection of the inside of a rogue’s mind, with wonderfully subtle asides into philosophy, literature and, even, food. Hugo is a find. And so is his journal.” –Detroit Free Press