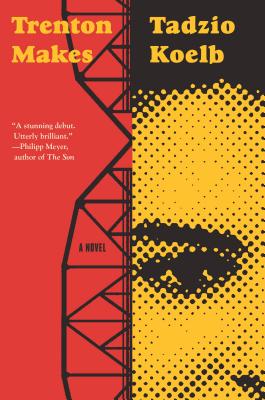 By Tadzio Koelb
Email or call us for information about purchasing this item.
Hard to Find

"A novel of bewitching ingenuity, one whose darkling, melodic mind conceives a world of ruin and awe..." --New York Times Book Review

A vivid, brutal, razor-sharp debut about a woman who carves out her share of the American Dream by living as a man

1946: At the apogee of the American Century, the confidence inspired by victory in World War II has spawned a culture of suffocating conformity in thrall to the cult of masculine privilege.
In the hardscrabble industrial city of Trenton, New Jersey, a woman made strong by wartime factory work kills her army veteran husband in a domestic brawl, disposes of his body, and assumes his identity. As Abe Kunstler, he secures a job in a wire rope factory, buys a car, and successfully woos Inez, an alcoholic dime dancer. He makes a home with her, but for Abe, this is not enough: to complete his transformation, he needs a son.
1971: A very different war is under way. The certainties of mid-century triumphalism are a distant, bitter memory, and Trenton's heyday as a factory town is long past. As the sign on the famous bridge says, "Trenton Makes, the World Takes."
The family life Abe has so carefully constructed is crumbling under the intolerable pressures of his long ruse. Desperate to hold on to what he has left, Abe searches for solutions in the dying city.
Written in brilliantly stylized prose, this gripping narrative is a provocative and incisive exploration of the nature of identity, and a disturbing portrait of desperation. Tadzio Koelb has crafted a slim gut shot of a novel that heralds the arrival of a writer of startling talent and imagination.

Tadzio Koelb is a graduate of the prestigious writing program at the University of East Anglia in the U.K. He has translated André Gide’s work and is an active reviewer and essayist for a variety of publications that include The New York Times and The Times Literary Supplement. He teaches writing at Rutgers University and lives in Brooklyn, New York. www.tadziokoelb.com

“Here is a novel of bewitching ingenuity, one whose darkling, melodic mind conceives a world of ruin and awe…Tadzio Koelb himself has made a novel worthy not only of New Jersey but of that exclusive fluorescence called art.”
—New York Times Book Review

"The honed-steel sentences on display here - vivid and sharp and scarily persuasive - are all the more harrowing for the vulnerability they manage to convey. Abe Kunstler is a singular protagonist, and Trenton Makes is a passionate and original first novel."
—Garth Risk Hallberg, author of City on Fire

"A novel cut from the same startling bolt of literary cloth used by writers like Djuna Barnes, William Faulkner or James Baldwin. Trenton Makes is about America now. Not the one that gropes at phantom meaning in gilded towers; the one filled with fierce, indelible human beings who squint out, unblinking at the raw, beautiful, wrecked world."
—Laird Hunt, author of Neverhome

"Trenton Makes, Tadzio Koelb’s debut novel, is lyrical, brutal, unorthodox, and brilliantly unsettling.  Koelb’s tale of Abe Kunstler’s journey across gender and through mid-century American time daringly eschews all simplistic feel-good tropes and truisms about gender. It unflinchingly narrates the brutality which underlies the daily performance of masculinity.  His understanding and vision are those of a novelist who dares to push the boundaries of 21st century thought.  Trenton Makesis a book which I can only hope the world is ready for."
—Robert Marshall, author of A Separate Reality

"This is the story of courage, of knife-edge need, of a battle to be oneself and stay oneself. Tadzio Koelb’s imagining of his unforgettable protagonist is as tough as it is compassionate; his prose seduces not just because it is stunning, but because it is uncompromising in its pursuit of one character’s mutilated truth."
—Belinda McKeon, author of Tender