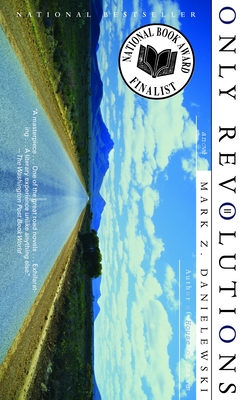 Sam:
They were with us before Romeo & Juliet. And long after too. Because they’re forever around. Or so both claim, carolling gleefully:

Sam & Hailey, powered by an ever-rotating fleet of cars, from Model T to Lincoln Continental, career from the Civil War to the Cold War, barrelling down through the Appalachians, up the Mississippi River, across the Badlands, finally cutting a nation in half as they try to outrace History itself.

By turns beguiling and gripping, finally worldwrecking, Only Revolutions is unlike anything ever published before, a remarkable feat of heart and intellect, moving us with the journey of two kids, perpetually of summer, perpetually sixteen, who give up everything except each other.

Hailey:
They were with us before Tristan & Isolde. And long after too. Because they’re forever around. Or so both claim, gleefully carolling:

Hailey & Sam, powered by an ever-rotating fleet of cars, from Shelby Mustang to Sumover Linx, careen from the Civil Rights Movement to the Iraq War, tearing down to New Orleans, up the Mississippi River, across Montana, finally cutting a nation in half as they try to outrace History itself.

By turns enticing and exhilarating, finally breathtaking, Only Revolutions is unlike anything ever conceived before, a remarkable feat of heart and intellect, moving us with the journey of two kids, perpetually of summer, perpetually sixteen, who give up everything except each other.

Mark Z. Danielewski was born in New York City and now lives in Los Angeles. He is the author of House of Leaves.

The daunting maze explored in Danielewski’s Borgesian first novel, House of Leaves (2000), only hinted at the depths to be plumbed in its intimidatingly innovative successor.
It’s a love story, road novel and paean to untrammeled freedom, presented in dual free-verse narratives spoken by Sam and Hailey, two 16-year-old vagabonds who embark on a mythic and allegorical journey across America, in a succession of variously acquired automobiles, during an expanding time period that stretches from the American Civil War to the immediate present. Rebels and malcontents, they repeatedly indulge in Whitmanesque, Rabelaisian arias (“I’m The World which / The Mountain descends from and / I laugh because it tickles”), while proclaiming their allegiance to nothing but each other (“Liberty and Love are one”), and eluding or battling characters emblematic of entrenched interests, convention and complacency (e.g., “Mad Robber Barons,” “Hoovercrats”). The publisher helpfully suggests reading eight pages of Sam’s story, then flipping the volume upside-down and reversing it, for eight pages in Hailey’s voice, until the two narratives meet in the middle of the book. Further complications arise from chronological enumerations of historical events on each page’s margins and versified comments on every page presented, upside-down, at the bottom of said page. Self-indulgence? Surely. But there’s a real story here, and a persuasive sense that the couple’s wild ride is a kind of creation myth that mirrors, as it presumes to explain, America’s unruly energies --- as Sam and Hailey experience Hailey’s brief dalliance with a macho avatar of military, militant power (“The Creep”), an Ongoing Party in New Orleans, a farcical hospital stay following an apparent overdose and an escape to the heartland and a climactic encounter with “the peril pursuing US.” They’re Bonnie and Clyde, Tristan and Isolde, an X-rated Archie and Veronica and perhaps All in the Family’s embattled liberal couple Mike and Gloria.
You have to work at it, but it’s a trip well worth taking.


“In his new novel, the author of House of Leaves is up to his old tricks–multicolored and upside-down text–and some flabbergasting new ones, including a double-ended structure that obliges the reader to flip the book every eight pages.”–The New Yorker

“Ambitious, meticulous, and original, Danielewski continues to survey the frontiers of the novel . . . The book hurtles you straight onto the road and into the split-screen vortex of the folie à deux of its couple.”–Los Angeles City Beat

“A lot is expected of Danielewski as a novelist who forgoes conventions, and he certainly delivers in his latest effort.” –San Fransico Chronicle

"A brisk page-turner . . . the heart of the book is its language, a patois somewhere between Kerouac's swagger and Joyce's chin-stroking wordplay. . . . Only Revolutions reveals an even stranger side of Danielewski.” –Los Angeles Times