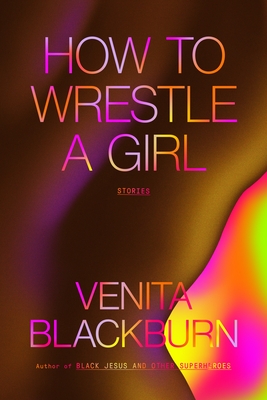 A Paris Review Staff Pick and an Amazon Editors' Pick. Finalist for the 2022 Lambda Literary Award for Lesbian Fiction and the Ernest J. Gaines Award for Literary Excellence, and longlisted for the 2022 Joyce Carol Oates Prize.

"Bold, witty, ominous and vulnerable . . . How to Wrestle a Girl shines in its propensity to magnify small moments, challenge our presumptions and dissect the beauty, danger and wonder of girlhood." --The New York Times Book Review

Hilarious, tough, and tender stories from a farseeing star on the rise

Venita Blackburn’s characters bully and suffer, spit and tease, mope and blame. They’re hyperaware of their bodies and fiercely observant, fending off the failures and advances of adults with indifferent ease. In “Biology Class,” they torment a teacher to the point of near insanity, while in “Bear Bear Harvest™,” they prepare to sell their excess fat and skin for food processing. Stark and sharp, hilarious and ominous, these pieces are scabbed, bruised, and prone to scarring.

Many of the stories, set in Southern California, follow a teenage girl in the aftermath of her beloved father’s death and capture her sister’s and mother’s encounters with men of all ages, as well as the girl’s budding attraction to her best friend, Esperanza. In and out of school, participating in wrestling and softball, attending church with her hysterically complicated family, and dominating boys in arm wrestling, she grapples with her burgeoning queerness and her emerging body, becoming wary of clarity rather than hoping for it.

A rising star, Blackburn is a trailblazing stylist, and in How to Wrestle a Girl she masterfully shakes loose a vision of girlhood that is raw, vulnerable, and never at ease.

Venita Blackburn is the author of the story collection Black Jesus and Other Superheroes, which won the Prairie Schooner Book Prize and was a finalist for the 2018 Young Lions Fiction Award and the PEN/Robert W. Bingham Prize for Debut Fiction. Her stories have appeared in The New Yorker online, The Paris Review, Pleiades, Madison Review, Bat City Review, American Short Fiction, and Bellevue Literary Review. She is a faculty member in the creative writing program at Fresno State University and the founder and president of Live, Write, an organization devoted to offering free creative writing workshops for communities of color.

"A bold, witty, ominous and vulnerable second book of stories that is as resolute and original as its author . . . With detailed imagery, keen observation and an ability to subvert expectations, Blackburn commands the page in few words . . . How to Wrestle a Girl shines in its propensity to magnify small moments, challenge our presumptions and dissect the beauty, danger and wonder of girlhood." --Jared Jackson, The New York Times Book Review

"This collection of extremely short stories builds its power as it goes along; characters and themes begin to emerge in fugue-like variations. I love how Blackburn lets the rawness into her voice in a number of the stories, many of which push against gender norms and expectations of sexual desire." --Lauren Groff, Jezebel

"[Blackburn] vividly renders the vulnerability of girlhood on the margins, revealing the aches of that time in one's life when everything feels at once carefree and world-ending. The 30 stories here appear on the page like snapshots from an off-color Polaroid—dazzling and disorienting." --Michelle Hart, Oprah Daily

"Blackburn, a prolific, stylish short-story writer in great command of her medium, dexterously revels in the humor and horror of coming of age whilst weary of the ways of the world." —Jordan Taliha McDonald, Vulture

"Blackburn’s voice is so nimble, toggling cooly between narrators and forms; she is a writer obviously in control of her craft and playing with its limitations. Blackburn can also be quietly vicious, breaking your heart with such a clean blade of controlled style that you don’t realize it’s happened until you’ve reached the end." --Lauren Kane, The Paris Review (staff pick)

"The kids at the heart of Venita Blackburn’s new short story collection aren’t just mere mean girls — they’re the kind of teens filled with effortless bravado, the ones who frighten and awe any adult who dare to question them. How to Wrestle a Girl is a must-read for any grown-up girl." --K.W. Colyard, Bustle

"The stories here are by turns serious and funny, ribald and emotionally honest . . . Blackburn’s collection intimates the commonality of Black experience across generations and personalities. The stories give speech to private, queer aspects of the body." --Anite Felicelli, Alta

"The sometimes spare and fragmented nature of the narrative is so perfectly fitting for a book focused on blossoming queerness, growing bodies, the aftermath of a life—in other words, things that are about to emerge. There is a brilliance to framing this collection as a how-to guide, as it offers no easy answers. No, instead, Venita Blackburn insists on making us stay in this chaotic, beautiful liminal space a while longer." --Katie Yee, Lit Hub

"A series of fiercely observant stories." --The Millions

"These are stories about the chaos of bodies, from menstruation to athletics, from sex to movie makeup. . .With brash humor and inventive energy, Blackburn sets her stories 'on the edge of disorder' and sustains that tension throughout. Boldly styled and deeply original." --Kirkus

"Eclectic and satisfying . . . Written from a distinct point of view and certainly never dull, this collection will appeal to those who enjoy experimental fiction and firmly places Blackburn as a writer to watch." --Booklist

"Blackburn presents a variety of Black and queer voices in this provocative collection . . . many entries present well-wrought narratives of young women coming to terms with their bodies and sexuality . . . Blackburn clearly has plenty of talent." --Publishers Weekly

"How to Wrestle a Girl is a work of stunning grace and rhythm. In these stories Venita Blackburn reminds us she is a writer unlike any other, her stories propelled by voice and wit and harsh beauty." --Nana Kwame Adjei-Brenyah, author of Friday Black

"Venita Blackburn’s How to Wrestle a Girl is bold and inventive, moving between sharp realism and work that shifts the rules of form, the body, or the physical world, finding new ways to tell the stories of how girls are taught to be girls. Blackburn has the talent to put words to the things we thought existed just outside of language, but she also has the wise restraint to bring us just close enough to look directly at the things there aren’t words for and leave them unsaid." --Danielle Evans, author of The Office of Historical Corrections

“At some point while reading How to Wrestle a Girl, I stopped wondering how Venita Blackburn writes perfect story after perfect story. Just know that these stories are playful, funny, moving, strange, and above all: perfect.” --Rion Amilcar Scott, author of The World Doesn't Require You

"There’s a wild imagination at work in Venita Blackburn's brilliant stories, and a nimbleness of language that delivers unforgettable characters hell bent to tell it like it is." --Pamela Painter, author of Fabrications