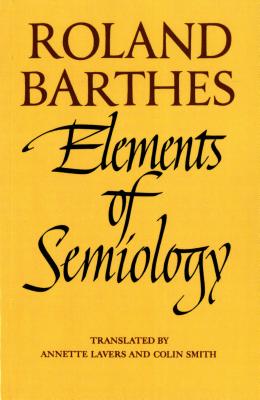 "In his Course in General Linguistics, first published in 1916, Saussure postulated the existence of a general science of signs, or Semiology, of which linguistics would form only one part. Semiology, therefore aims to take in any system of signs, whatever their substance and limits; images, gestures, musical sounds, objects, and the complex associations of all these, which form the content of ritual, convention or public entertainment: these constitute, if not languages, at least systems of signification . . . The Elements here presented have as their sole aim the extraction from linguistics of analytical concepts which we think a priori to be sufficiently general to start semiological research on its way. In assembling them, it is not presupposed that they will remain intact during the course of research; nor that semiology will always be forced to follow the linguistic model closely. We are merely suggesting and elucidating a terminology in the hope that it may enable an initial (albeit provisional) order to be introduced into the heterogeneous mass of significant facts. In fact what we purport to do is furnish a principle of classification of the questions. These elements of semiology will therefore be grouped under four main headings borrowed from structural linguistics: I. Language and Speech; II. Signified and Signifier; III. Syntagm and System; IV. Denotation and Connotation."--Roland Barthes, from his Introduction

“Roland Barthes, the West's master critic, has given us fertile rereadings of such classic French authors as Racine and Balzac, brought to attention lesser-known writers like Fourier and Loyola, studied the mythologies and sign systems of modern life and fashion, explored cinema and music, examined culture-as-system in Japan, tried to delineate the erotics of reading and writing, and touched provocatively on numerous other topics. What he shares with the best of his colleagues is the assumption that criticism is an attitude, not an act. He brings his readers questions and speculations that are always engaging and expansive. It is just this temperament that makes him the latest heir of the tradition of French moralistes--Montaigne, Diderot, Voltaire, and, in his own day, Gide and Sartre--who used their cultural conscience and experimental brilliance to synthesize intellectual, ethical, and literary concerns.” —Jacob Stockinger, San Francisco Review of Books