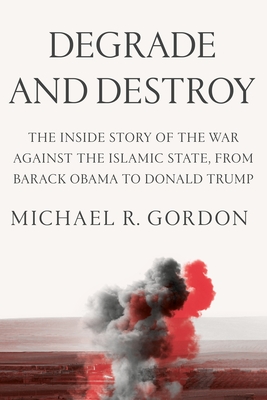 "This is the ultimate insider's view of perhaps the darkest chapter of the Forever Wars. Michael Gordon knows everyone, was seemingly everywhere, and brings a lifetime of brilliant reporting to telling this crucial story." —Retired U.S. Navy admiral James Stavridis, 16th Supreme Allied Commander of NATO and author of To Risk it All: Nine Crises and the Crucible of Decision

An essential account of the struggle against ISIS—and of how Presidents Obama, Trump, and Biden have waged war.

In the summer of 2014, President Barack Obama faced an unwelcome surprise: insurgents from the Islamic State had seized the Iraqi city of Mosul and proclaimed a new caliphate, which they were ruling with an iron fist and using to launch terrorist attacks abroad. After considerable deliberation, President Obama sent American troops back to Iraq. The new mission was to “degrade and ultimately destroy” ISIS, primarily by advising Iraqi and Syrian partners who would do the bulk of the fighting and by supporting them with airpower and artillery. More than four years later, the caliphate had been dismantled, the cities of Mosul and Raqqa lay in ruins, and several thousand U.S. troops remained to prevent ISIS from making a comeback. The “by, with, and through” strategy was hailed as a template for future campaigns. But how was the war actually fought? What were the key decisions, successes, and failures? And what was learned?

In Degrade and Destroy, the bestselling author and Wall Street Journal national security correspondent Michael R. Gordon reveals the strategy debates, diplomatic gambits, and military operations that shaped the struggle against the Islamic State. With extraordinary access to top U.S. officials and military commanders and to the forces on the battlefield, Gordon offers a riveting narrative that ferrets out some of the war’s most guarded secrets.

Degrade and Destroy takes us inside National Security Council meetings at which Obama and his top aides grapple with early setbacks and discuss whether the war can be won. It also offers the most detailed account to date of how President Donald Trump waged war—delegating greater authority to the Pentagon but jeopardizing the outcome with a rush for the exit. Drawing on his reporting in Iraq and Syria, Gordon documents the closed-door deliberations of U.S. generals with their Iraqi and Syrian counterparts and describes some of the toughest urban battles since World War II. As Americans debate the future of using force abroad, Gordon’s book offers vital insights into how our wars today are fought against militant foes, and the enduring lessons we can draw from them.

Michael R. Gordon is the national security correspondent for The Wall Street Journal and former chief military correspondent for The New York Times. He is the co-author with the late retired General Bernard Trainor of three definitive histories of the United States’ wars in Iraq: The Endgame, Cobra II, and The Generals’ War.

"Michael Gordon brilliantly dissects the decisions made in national-security sessions and on the ground that resulted in U.S.-led forces gaining the upper hand [over ISIS]. His account of the battle to retake Mosul alone is worth the price of the book; rarely has urban warfare been brought so vividly to life." —Air Mail

"We need more foreign correspondents, and more history books, like this. Indeed, one of the strong suits of Degrade and Destroy is its ability to highlight policy debates within each U.S. administration . . . The truth, as always, is more complicated—and, as Gordon proves, more interesting . . . Degrade and Destroy is more than just superb reporting. It is also the first draft of history on a war whose consequences we will be living with, both today and for the foreseeable future." —Sean Durns, Washington Examiner

"Degrade and Destroy offers a comprehensive history of the U.S.’ efforts to defeat the Islamic State . . . Throughout the book, Gordon seamlessly blends the political fight with the on-the-ground kinetic fight. Unlike other journalists who cover this beat, Gordon is less interested in the he-said, she-said reputational laundering prevalent in many political battles and more interested in the critical nexus of politics and war, and the friction that results from the collision of these two forces . . . Timely and fascinating." —Joshua C. Huminski, National Security Institute

"Gordon, who embedded with anti-ISIS forces, elucidates both backroom policy wrangles and frontline firefights; his riveting recreation of the 2016–2017 battle to retake Mosul is an epic of desperate combat . . . This is the definitive record of a critical chapter in the fight against extremism." —Publishers Weekly

"This is the ultimate insider's view of perhaps the darkest chapter of the Forever Wars—the campaign to stop the Islamic State's march toward a Caliphate. Michael Gordon knows everyone, was seemingly everywhere, and brings a lifetime of brilliant reporting to telling this crucial story." —Retired U.S. Navy admiral James Stavridis, 16th Supreme Allied Commander of NATO and author of To Risk it All: Nine Crises and the Crucible of Decision

"Michael Gordon has written an amazing book. His typically extensive research will more than satisfy any academic in the field. At the same time, he has a top reporter's gift of telling a compelling story. His account of the battle of Mosul is riveting—in my view, the finest war reporting since WW II. And like the best reporting then, this book is never about Michael Gordon. He is the lens through which we are brought to the battlefield, and into the rooms where the decisions happen—in Washington, Baghdad, and places in between. The fight against ISIS is one of the most consequential and complex struggles of our time. Gordon explains why, and most critically, why it isn't over. This book is not only about the last war. It's about the next one." —Ryan Crocker, former United States Ambassador to Iraq and recipient of the Presidential Medal of Freedom

“Degrade and Destroy is the first comprehensive history of the US-led coalition’s campaign to defeat ISIS. Gordon takes us from the Situation Room to battlefields across Iraq and Syria and lets us witness how key decisions were made and how policy was executed with partners on the ground. This is a must-read book for anyone who wants to understand this consequential chapter of counterterrorism and to learn the hard-won lessons it offers for the future.” —Michèle Flournoy, former United States Under Secretary of Defense for Policy

“Brilliant. Degrade and Destroy is an elegantly concise narrative of the stunningly complex and brutal war to destroy ISIS. Veteran journalist and historian Michael Gordon connects well-dressed policymakers to grime-covered soldiers in a compelling story that is undoubtedly a harbinger of future conflicts.” —Retired U.S. Army general Stanley McChrystal

"There have been a lot of books written about the Islamic State but none, to date, about the American-orchestrated military campaign that between 2014 and 2019 destroyed the terrorists' 'caliphate' in Syria and Iraq. Michael Gordon, one of America's finest military correspondents and military historians, fills the vacuum with Degrade and Destroy. Meticulously reported, it provides the definitive account of how the U.S. military during the Obama and Trump administrations, working with allies in the region, helped to roll back the Islamic State. This is a book that will be read for years to come by anyone interested in the history of the Middle East or of the U.S. military." —Max Boot, senior fellow at the Council on Foreign Relations and author of The Road Not Taken: Edward Lansdale and the American Tragedy in Vietnam

"Michael Gordon, the premier journalistic historian of America's wars in Iraq, has written the definitive account of the campaign against the Islamic State. Gordon's chronicle takes the reader inside the White House and command posts and to the frontlines of the grueling, bloody urban battle for Mosul. Degrade and Destroy deserves a place on policymakers' desks and in American classrooms." —Linda Robinson, author of Tell Me How This Ends: David Petraeus and the Search for a Way Out of Iraq

"We know a great deal about the history and ideology of the Islamic State, and its reign of terror its caliphate visited on Iraq and Syria. Comparatively little is known about how the United States and its allies defeated this scourge. Degrade and Destroy is a unique and comprehensive history of America’s war against the Islamic State. Detailed, incisive and meticulously documented, this book is military history at its best, an authoritative portrait of a new kind of war against a protean enemy. Essential reading for anyone concerned with America’s Middle East wars." —Vali Nasr, professor at the School of Advanced International Studies at Johns Hopkins University and author of The Dispensable Nation: American Foreign Policy in Retreat

“Degrade and Destroy is the definitive account of the US-led war against ISIS. It bears all the hallmarks of a book by Michel Gordon; it is accessible, authoritative and deeply reported.” —Peter Bergen, author of The Rise and Fall of Osama bin Laden

"Michael Gordon is the Tom Brady of national security journalists—except that he is nowhere near retirement. Gordon will surely go down as one of the best defense reporters in the history of the United States, with a career now spanning four decades. In Degrade and Destroy, he shows he is still on the very top of his game. The counter-ISIS campaign was a whole new kind of war, meriting a dedicated analysis of the type Gordon provides. With his deep empirical knowledge, steely-eyed realism, dogged field research, intellectual skepticism, and wonderful curiosity, he weaves another great narrative here—and, for the moment at least, a story with a relatively happy ending." —Michael O'Hanlon, senior fellow at the Brookings Institution and author of The Art of War in an Age of Peace

“No journalist has done a better job of covering America’s two decades of war in Iraq than Michael Gordon. This, his fourth book on that conflict, is in many ways his best, reflecting deep, honest reporting, lucid writing, and dispassionate judgment about tactics as well as strategy. In describing the tail end of America’s Iraq war he is also describing the future of conflict well beyond that battered country.” —Eliot A. Cohen, Arleigh Burke Chair in Strategy at the Center for Strategic & International Studies