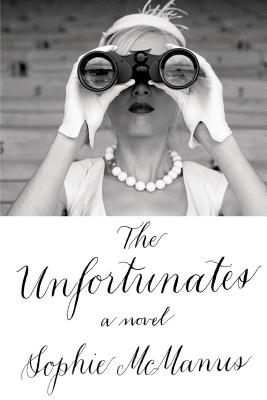 By Sophie McManus
Email orders@greenlightbookstore.com for information about this item.
Out of Print / Unavailable

In this "brilliant social satire of life among the 1 percent of the 1 percent" (The Washington Post), Sophie McManus presents a contemporary American tragedy of breathtaking scope. The Unfortunates is the story of a wealthy family coming to terms with how their privilege and entitlement means nothing in the face of an uncaring universe.

A larger-than-life heiress to a rubber baron’s fortune, once known for her cruel wit as much as for her tremendous generosity, Cecilia Somner is now in opulent decline. Afflicted with a rare disease and touched by mortality for the first time, her gilded, bygone values collide with an unforgiving present.

Now, along with her troubled son, George, and his working-class wife, Iris, CeCe must face the Somners’ dark legacy and the corrupting nature of their fortune. As the family struggles to cope with their rising misfortunes, the secrets and lies between matriarch, son, and daughter-in-law grow entangled. CeCe’s condition topples her world, giving her a glimpse at how the rest of society deals with disaster, changing her perspectives on medical marijuana, physical and mental illnesses, housing crises, and LGBTQ families. But her realizations come too late as the Somners are besieged by a startling turn of events as unforgettable as it is unexpected.

While no riches can put things right for the unfortunate Somners, when all is lost they learn what life beyond the long, shimmering shadow cast by their dynasty may become.

"A strong, gripping debut" (Entertainment Weekly), The Unfortunates is a hilarious and heartbreaking novel about a prominent family on the edge of ruin and a meditation on love as delusional obsession, as transformation, and ultimately as a coming to grace.

"McManus is a talented, intelligent writer, and the story is as well-paced as a good thriller."?MOIRA HODGSON, The Wall Street Journal

"A wonderfully precise and subtle?not to mention unexpectedly moving?take on the assumptions and beleaguerments that go with great wealth."?DAPHNE MERKIN, The New Yorker

SOPHIE McMANUS was born in New York City, and she received her BA from Vassar College and her MFA in creative writing from Sarah Lawrence College. She is a recipient of fellowships from the Fine Arts Work Center in Provincetown, the Saltonstall Foundation, and the Jentel Foundation. Her work has appeared in American Short Fiction, Memorious, and Tin House, among other publications. She teaches writing in Brooklyn, New York. The Unfortunates is her first book.

"Wonderfully precise and subtle—not to mention unexpectedly moving...Sophie McManus...is a truly dexterous writer, one who eyes the insular world she has chosen to crack open for us with as much wisdom as wit....One wonders where her formidable gift for social satire will take her next."—Daphne Merkin, The New Yorker

“Ms. McManus is a talented, intelligent writer, and the story is as well-paced as a good thriller.”—Moira Hodgson, The Wall Street Journal

“Aside from the beauty of The Unfortunates' line-by-line prose, the novel's great strength is its multifaceted approach. It is an ambitious piece that encapsulates generations and continent-spanning bank accounts while never feeling too callously panoramic.”—B. David Zarley, Paste magazine

“McManus takes her readers through...with such narrative gusto (and a great many very pretty turns of phrase) that you'd think this were her twentieth novel instead of her first.”—Steve Donoghue, OpenLettersMonthly.com

“In finely etched detail as sharp as shards of glass, McManus reveals in The Unfortunates the corrupting power of wealth and the myriad ways it infects individual lives and families. It is as relevant as it is compulsively readable.”—Amanda Coplin, author of The Orchardist

“Sophie McManus has a shrewd eye for telling gestures and an ear for cruel speech and kindness. She is an incisive, surprising prose stylist, and her debut novel heralds an exciting new talent with an old soul.”—Christine Schutt, author of Prosperous Friends

“Sophie McManus's stunning debut novel revisits American money and brilliantly reconfigures the tradition of fiction about the very rich. What is truly rich about this first novel is the language—lucid, quick, accessible, and yet almost cubist in its syntactical swerves and surprising word choices—with which McManus invests the inner lives of the Somners, mother, son, and daughter-in-law, three unforgettable and finally poignant protagonists.”—Jaimy Gordon, author of Lord of Misrule

“Is there anything Sophie McManus can't do? Whether it's New York high society or the Amazonian rubber industry or the stubborn indignities of old age, McManus writes with brio and with humor and with immense sympathy. The virtuosity in these pages is astonishing, but just as astonishing is this novel's abiding heart.”—Joshua Henkin, author of The World Without You and Matrimony

“A big, chewy novel written with comic panache and an infectious tenderness toward the blunders of its heroes. The Unfortunates is both a mirror on the income inequality of the current moment and a social novel in the old, plotty mode: voracious for detail and punctuated by gasp-inducing turns of fate. Its subjects are money and the people unfortunate enough to have it. Who knew the rich deserved so much to be pitied?”—Salvatore Scibona, author of The End

“To her great credit, McManus uncovers the humanity of a group that rarely receives our empathy even as she exposes the dark side of privilege and entitlement in a timely novel enriched with touches of Edith Wharton.”—Booklist

“Both funny and heartwarming.”—Shelf Awareness

“[McManus's] achievement in this novel is creating characters who develop over time, who have goals and desires, who try as hard as they can but still mess up other people's lives. We care about them.”—Stephanie Shapiro, The Buffalo News