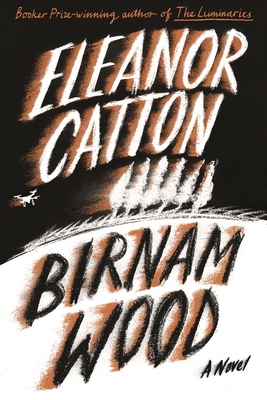 “Birnam Wood is terrific. As a multilayered, character-driven thriller, it’s as good as it gets. Ruth Rendell would have loved it. A beautifully textured work—what a treat.” —Stephen King

“One of the finest writers of our time.” —Jonathan Ruppin, The Independent

The Booker Prize–winning author of The Luminaries brings us Birnam Wood, a gripping thriller of high drama and kaleidoscopic insight into what drives us to survive.

A landslide has closed the Korowai Pass on New Zealand’s South Island, cutting oﬀ the town of Thorndike and leaving a sizable farm abandoned. The disaster presents an opportunity for Birnam Wood, an undeclared, unregulated, sometimes-criminal, sometimes-philanthropic guerrilla gardening collective that plants crops wherever no one will notice. For years, the group has struggled to break even. To occupy the farm at Thorndike would mean a shot at solvency at last.

But the enigmatic American billionaire Robert Lemoine also has an interest in the place: he has snatched it up to build his end-times bunker, or so he tells Birnam’s founder, Mira, when he catches her on the property. He’s intrigued by Mira, and by Birnam Wood; although they’re poles apart politically, it seems Lemoine and the group might have enemies in common. But can Birnam trust him? And, as their ideals and ideologies are tested, can they trust one another?

A gripping psychological thriller from the Booker Prize–winning author of The Luminaries, Eleanor Catton’s Birnam Wood is Shakespearean in its drama, Austenian in its wit, and, like both inﬂuences, fascinated by what makes us who we are. A brilliantly constructed study of intentions, actions, and consequences, it is a mesmerizing, unﬂinching consideration of the human impulse to ensure our own survival.

Eleanor Catton is the author of the international bestseller The Luminaries, winner of the Man Booker Prize and a Governor General’s Literary Award. Her debut novel, The Rehearsal, won the Betty Trask Award, was short-listed for the Guardian First Book Award and the Dylan Thomas Prize, and was long-listed for the Orange Prize. She is also the screenwriter of Emma, a 2020 feature ﬁlm adaptation of Jane Austen’s novel. Born in Canada and raised in New Zealand, she now lives in Cambridge, England.

“A deadly landslide; illegal gardens; cocktail parties of the rich and powerful—toil and trouble bubble as Catton skewers the mores of our era in gorgeous language, cementing her reputation as a generational talent.”
—Oprah Daily

“Twisty and surprising, and Franzen-like in its rich character development and clear-eyed descriptions of social issues like cultural appropriation, class, wealth inequality, nature and the universal human desire to be liked.”
—Samantha Schoech, San Francisco Chronicle

“The subsequent moral battles, compromises, and mysteries fill in the beating heart of this brilliant, clever book.”
—Lauren Puckett-Pope, Elle

“Birnam Wood is a multi-layered book . . . Catton is not just a master at spinning a web of competing philosophies, though; her characters are deeply flawed but you can’t help but root for them.”
—Chloe Schama, Vogue

“As saturated with moral scrutiny and propulsive plotting as 19th-century greats; it’s a twisty thriller via Charles Dickens, only with drones . . . Readers will hold their breath until the last page . . . This blistering look at the horrors of late capitalism manages to also be a wildly fun read.”
—Kirkus Reviews, starred review

“At once satirical and serious, [Birnam Wood is] vintage Catton: blazingly original, intricately plotted, and as thought-provoking as it is gripping.”
—Madeleine Feeny, The Bookseller

“Sharp, sizzling . . . Birnam Wood is tightly wound and psychologically thrilling, and Catton’s fans and readers new to her powers will savor it to the end.”
—Booklist, starred review

“A tragic eco-thriller of betrayed ideals and compromised loyalties . . . [Catton] pulls a taut, suspenseful story from the tangle of vivid characters. Thanks to a convincing backdrop of ecological peril, Catton’s human drama is made even more acute.”
—Publishers Weekly, starred review

“Mysterious and marvelously unpredictable, Birnam Wood had me reading the way I used to as a kid—curiously, desperately, and as if it was the whole world. Eleanor Catton connects to the natural and unnatural ways in which we try to control our environments, our impulses, and one another. A spectacular novel, conjured by a virtuoso.”
—Rivka Galchen, author of Everyone Knows Your Mother Is a Witch

“Phenomenal and utterly gripping, Birnam Wood has the sense of a literary writer setting herself free and having a bit of fun. It’s fantastic. I loved it.”
—Jessie Burton, author of The Miniaturist

“If George Eliot had written a thriller, it might have been a bit like this.”
—Francis Spufford, author of Light Perpetual

“A filmic and page-turning thriller. Hubris and ambition, vanity and greed, principle and expediency, courage and hope—all are here, but not necessarily where you expect to find them.”
—Carys Davies, author of The Mission House

“Birnam Wood is electric: a spectacular book. It has the pace and bite of a thriller. It has an iron-willed morality. It feels like the product of astonishing skill and formidable love. It’s literally, physically breathtaking.”
—Katherine Rundell, author of Super-Infinite

“I read this in two deep gulps—it’s delicious; it had me rereading passages aloud. Catton’s storytelling is deft and irresistible in this merciless whirlpool of a book, which pulls you inexorably toward its final tragedy.”
—Kiran Millwood Hargrave, author of The Dance Tree

“This is an urgent, compelling read, bleak but deeply moving and humanly credible. Eleanor Catton offers an unsparing analysis of the various deadly self-delusions and corruptions that are generated by our global denial of the planet’s crisis—but also by our naive, confused yearnings to be numbered among the righteous. It is a book of real moral depth.”
—Rowan Williams, author of Looking East in Winter