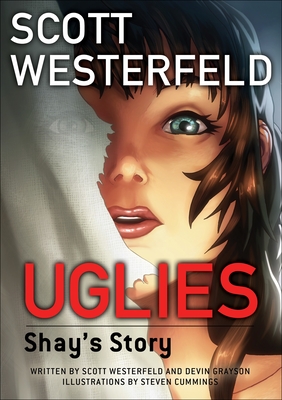 This is book number 1 in the Uglies Graphic Novels series.

“This whole game is just designed to make us hate ourselves.”—Shay

Uglies told Tally Youngblood’s version of life in Uglyville and the budding rebellion against the Specials. Now comes an exciting graphic novel revealing new adventures in the Uglies world—as seen through the eyes of Shay, Tally’s rebellious best friend who’s not afraid to break the rules, no matter the cost.

A few months shy of her sixteenth birthday, Shay eagerly awaits her turn to become a Pretty—a rite-of-passage operation called “the Surge” that transforms ordinary Uglies into paragons of beauty. Yet after befriending the Crims, a group of fellow teens who refuse to take anything in society at face value, Shay starts to question the whole concept. And as the Crims explore beyond the monitored borders of Uglyville into the forbidden, ungoverned wild, Shay must choose between the perks of being Pretty and the rewards of being real.

Scott Westerfeld’s novels include Evolution’s Darling, a New York Times Notable Book, as well as the Uglies series, the Leviathan trilogy, the Midnighters trilogy, The Last Days, and more. Scott was born in Texas and alternates summers between Sydney, Australia, and New York City.

Steven Cummings lives with his family in the magical land known as almost-Tokyo. He has worked for a variety of comic and manga publishers, ranging from Marvel and DC to Tokyopop, on titles including Wolverine: First Class, Elektra, Batman: Legends of the Dark Knight, Deadshot, and Pantheon High.  He is also a member of the Canadian art empire known as Udon.

Devin Grayson turned a lifelong obsession with fictional characters into a dynamic writing career. Best known for her work on the Batman titles for DC Comics and the celebrated X-Men: Evolution comic for Marvel, she has written in a number of different media and genres, from comic books and novels to videogame scripts and short essays.