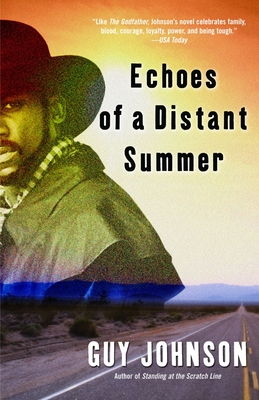 By Guy Johnson
$18.00
Available to order (allow for shipping time to bookstore or direct-to-home)

“You done lived a tough life, boy, and I know I’m part responsible for that. I ain’t askin’ you to excuse me or forgive me. Just know I did the best I knew to do. I was just tryin’ to make you tough enough to deal with the world. To stand tall among men, I knew you had to be strong and have yo’ own mind.”

“You were preparing me for war, Grandfather.”


Guy Johnson, the author of the critically acclaimed debut Standing at the Scratch Line, continues the Tremain family saga.

Jackson St. Clair Tremain hasn’t spoken to his grandfather King in nearly twenty years. Disgusted by the violence and bloodlust that seemed to be his grandfather’s way of life, Jackson chose to distance himself from King and live a simpler life. But now King is gravely ill, and his impending death places Jackson’s life—as well as those of his family and friends—in jeopardy. Reluctantly, Jackson travels to Mexico to see King. But after a brief reconciliation, his grandfather is assassinated, and Jackson suspects that his grandmother Serena may have had a hand in it. Jackson takes control of King’s organization, and as he does, he reflects on the summers he spent in Mexico as a child and the lessons he learned there at the knee of his strong-willed, complex grandfather.

In Echoes of a Distant Summer, Guy Johnson introduces us to a new hero, Jackson St. Clair Tremain, who learns that, like his grandfather, he must be willing to protect those he loves—at all costs.

Guy Johnson is the author of the novel Standing at the Scratch Line and a book of poetry, In the Wild Shadows. After graduating from high school in Egypt, he com-pleted college in Ghana. Johnson managed a bar on Spain’s Costa del Sol, ran a photo safari service from London through Morocco and Algeria, and worked on oil rigs in Kuwait. Most recently he worked in the local government of Oakland, California, for more than ten years. He lives in Oakland with his wife and son. He is the son of Dr. Maya Angelou. To learn more about Guy Johnson and his work, visit his website at www.guyjohnsonbooks.com.

Praise for Standing at the Scratch Line

“Standing at the Scratch Line is a big, good-hearted book, carried along all but effortlessly by the power of the images it has tapped into and by Guy Johnson’s remarkably adroit writing.” —The Washington Post

“[King] Tremain has the qualifications to be one of literature’s most versatile heroes: a sharp-shooting soldier (WWI), jazz-club impresario, gangster, bootlegger, smuggler, general-store owner, vigilante, lover and, finally, doting father and grandfather.” —The Wall Street Journal

“Fast-paced, intelligent . . . [This] novel presents a brief history of twentieth-century black America in the guise of a testosterone-fueled adventure yarn.” —Library Journal