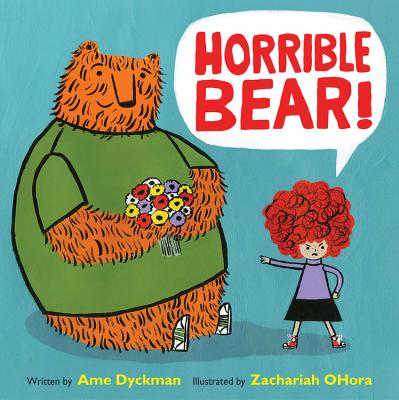 The New York Times-bestselling duo behind Wolfie the Bunny presents a hilarious read-aloud about accidents, outbursts, manners...and the power of saying "I'm sorry."
Bear didn't mean to break a little girl's kite, but she's upset anyway--upset enough to shout "HORRIBLE BEAR!" Bear is indignant. He doesn't think he's horrible! Then Bear gets a truly Horrible Bear idea. What will he do next? As Bear prepares to live up to his formerly undeserved reputation, the girl makes a mistake of her own, and realizes that maybe--just maybe--Bear isn't as horrible as she had thought.

Ame Dyckman is the award-winning author of That's Life!, Dandy, Read the Book, Lemmings!, You Don't Want a Unicorn!, Horrible Bear!, the New York Times Bestselling Wolfie the Bunny, and more. Ame lives in New Jersey with her family, pets, and hair bow collection. You can visit Ame on Twitter (@AmeDyckman).
Zachariah OHora is the illustrator of a number of children's books, including Wolfie the Bunny and Read the Book, Lemmings! (both written by Ame Dyckman). His author-illustrator debut Stop Snoring, Bernard! was awarded the Society of Illustrators Founder's Award, and his book No Fits Nilson! was the Huffington Post Best Picture Book of the Year for 2013. He lives and works in Narberth, PA.


"As fun as a theme park ride... Dyckman and OHora specialize in full-spectrum emotion and offbeat charm."

*"A perfectly over-the-top look at tantrums, friendship, and forgiveness that is sure to resonate with preschoolers and parents alike."—Booklist, Starred Review

"Author Dyckman has a knack for combining humor with emotional truths, and illustrator OHora delivers a charming spitfire of a character with a mess of red curls as unruly as her emotions."—Common Sense Media