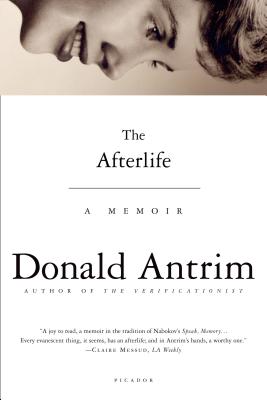 In the winter of 2000, shortly after his mother's death, Donald Antrim began writing about his family. In pieces that appeared in The New Yorker and were anthologized in Best American Essays, Antrim explored his intense and complicated relationships with his mother, Louanne, an artist, teacher, and ferociously destabilizing alcoholic; his gentle grandfather, who lived in the mountains of North Carolina and who always hoped to save his daughter from herself; and his father, who married his mother twice.

The Afterlife is an elliptical, sometimes tender, sometimes blackly hilarious portrait of a family--faulty, cracked, enraging--and of a man struggling to learn the nature of his origins.

Donald Antrim is the critically acclaimed author of Elect Mr. Robinson for a Better World, The Hundred Brothers, and The Verificationist, as well The Afterlife, a memoir about his mother. A regular contributor to The New Yorker, he has also been the recipient of a MacArthur "Genius" Grant and fellowships from the John Simon Guggenheim Memorial Foundation, the National Endowment for the Arts, and the New York Public Library. He lives in New York City.

“The Afterlife is like nothing else. With tenderness, humor, and insight, Donald Antrim evokes the volatile atmosphere of the home that he and his sister shared with mother Louanne. . . . Should be required reading for everyone who has been haunted by the restless ghosts of those they love most.” —Francine Prose, People

“The book is very funny when it wants to be, but in between it is rueful. . . . It's Antrim's best book so far.” —Joan Acocella, The New York Review of Books

“A memoir glimmering with hard-won beauty and alive with meaning.” —Newsday