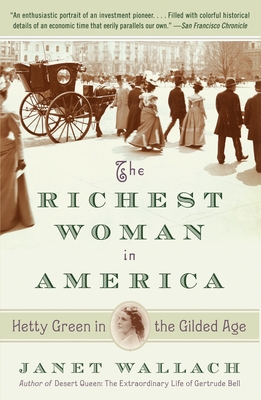 By Janet Wallach
$17.00
Email orders@greenlightbookstore.com for information about this item.

No woman in the Gilded Age made as much money as Hetty Green, America’s first female tycoon. A strong woman who forged her own path, she was worth at least $100 million by the end of her life in 1916—equal to about $2.5 billion today.

Green was mocked for her simple Quaker ways and her unfashionable frugality in an era of opulence and excess; the press even nicknamed her “The Witch of Wall Street.” But those who knew her admired her wit and wisdom, and while financiers around her rose and fell as financial bubbles burst, she steadily amassed a fortune that supported businesses, churches, municipalities, and even the city of New York. Janet Wallach’s engrossing biography reveals striking parallels between past financial crises and current recession woes, and speaks not only to history buffs but to today’s investors, who just might learn a thing or two from Hetty Green.

JANET WALLACH is the author of nine books, including Desert Queen: The Extraordinary Life of Gertrude Bell, which has been translated into twelve languages and was a New York Times Notable Book of the Year.

“An enthusiastic portrait of an investment pioneer who matched her male counterparts in ambition and guile, and never backed down from a fight. . . . Filled with colorful historical details of an economic time that eerily parallels our own.” —San Francisco Chronicle

“Aspiring investors might want to memorize Hetty Green’s words as they do Warren Buffett’s. . . . In telling Green’s story, Wallach also tells the story of America’s repeated busts and booms in a way that seems very relevant right now.” —The Washington Post

“A lively book that whisks readers through five decades of Green’s wheeling and dealing. . . Wallach brings a warm empathy to her account.” —The Daily Beast

“Hetty Green was a talented investor who had the bad luck to be born in an era when a guild, the guild of Victorian men, shut out a whole class of minds—women’s.” —The Wall Street Journal

“Wallach does an admirable job putting together a more complete picture of the fascinating and ground-breaking Green beyond her ‘Witch of Wall Street’ reputation.” —USA Today

“It’s always fun to return to the story of Green, who died in 1916 with a fortune of $100 million. . . . Incredibly, it was money she earned through savvy and aggressive investing. Green, who was notoriously frugal and never shied away from a fight, earned a reputation as the mean, crazy lady of Wall Street. But Wallach presents Green’s charitable self, a woman who could be wise and witty, warm as well.” —New York Daily News

“An enjoyable account. . . . Wallach successfully portrays a compelling woman who kept her eyes on the glittering financial prize, using a commonsense philosophy regarding real estate and investment throughout the nineteenth century’s Wall Street roller-coaster.” —Publishers Weekly

“Despite her shrewd investment acumen, [Green’s] remarkable achievements were often overshadowed by her well-publicized eccentricities . . . . Most journalists failed to acknowledge her blistering business savvy and the tremendous power she wielded in a male-dominated arena. Wallach does Green long-overdue service by providing an evenhanded account.” —Booklist

“Absorbing . . . takes us through America’s repeated booms and busts through the eyes and coolheaded example of the remarkable financial genius Hetty Green. . . . Should be mandatory reading for investors.” —The Washington Times