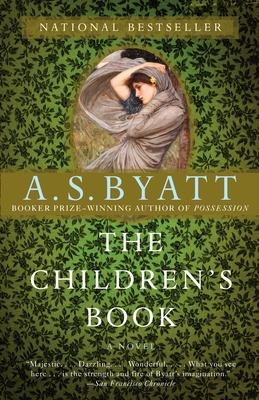 Imagine the kids who were the basis for Christopher Robin and Peter Pan: sure their childhoods were magical, but they also had to deal with having their lives mined/exploited for art, the complicated hypocrisies of their parents (so many affairs), and oh World War I. Byatt's sprawling, enthralling novel follows a fictional version of these messy late 19th / early 20th century families; it's never boring and sometimes verges on magical. (Plus, the Midsummer party scene is iconic.)

“The Children's Book is rich with history and generous with story, detailing the lives of a group of English free thinkers, beginning in the 1890s and continuing to the onset of World War I. The wonderfully detailed period and Byatt's characters make for an enormously satisfying story.”
— Mark LaFramboise, Politics & Prose Books &, Washington, DC

From the Booker Prize-winning, bestselling author of Possession: a deeply affecting story of a singular family.

When children’s book author Olive Wellwood’s oldest son discovers a runaway named Philip sketching in the basement of a museum, she takes him into the storybook world of her family and friends. But the joyful bacchanals Olive hosts at her rambling country house—and the separate, private books she writes for each of her seven children—conceal more treachery and darkness than Philip has ever imagined. The Wellwoods’ personal struggles and hidden desires unravel against a breathtaking backdrop of the cliff-lined shores of England to Paris, Munich, and the trenches of the Somme, as the Edwardian period dissolves into World War I and Europe’s golden era comes to an end.

A. S. Byatt is the author of numerous novels, including the quartet The Virgin in the Garden, Still Life, Babel Tower and A Whistling Woman; The Biographer’s Tale; and Possession, which was awarded the Booker Prize. She has also written two novellas, published together as Angels & Insects; five collections of shorter works, including The Matisse Stories and Little Black Book of Stories; and several works of nonfiction. A distinguished critic as well as a novelist, she lives in London.

“Bristling with life and invention. . . . A seductive work by an extraordinarily gifted writer.” —The Washington Post

“[Byatt’s] magnum opus. . . . Lushly detailed. . . . Every stitch of this tapestry is connected to the whole.” —The Seattle Times

“[A] ravishing epic. . . . This is a classic Byatt fusion of fact and uncannily luscious imagery, mixed in the ideal proportions: not too hot, not too cold—just right.” —Salon

“A stunning achievement: a novel of ideas that crackles with passion, energy and emotive force. . . . I did not want The Children’s Book to end . . . I wanted more of this ambitious, compelling novel, certainly Byatt’s best since Possession, and possibly her best ever.”  —Patricia Hagen, Minneapolis Star Tribune

“Sweeping. . . . A literary feast. . . . Byatt fills a huge canvas with the political and social changes that swept the world in those years . . . She elicits great compassion of the individual beings caught in that tableau. It’s not a tale you’ll soon forget.” —USA Today

“Rich, expansive. . . . Byatt is a spinner of multiple tales, adding gorgeous layers and dimensions to this fictional world.” —The Los Angeles Times

“Engaging and rewarding.” —The New Yorker

“A rich and ambitious work, steeped in ideas and capped with a lacerating final act. . . . Byatt’s penetrating, unsentimental style hits its mark. [The period] details are never less than fascinating.” —Time

“A complete and complex world, a gorgeous bolt of fiction. . . . The magic is in the way Byatt suffuses her novel with details, from the shimmery sets of a marionette show to clay mixtures and pottery glazes.” —The Atlantic Monthly

“Only Byatt could stuff this massive book so full of detail, character, and history while never losing track either of human feelings or of the sweeping, precipitous decline of the culture she documents.” —The Onion A.V. Club

“Fascinating . . . An exhilarating panorama . . . Passionate, intelligent. . . . A richly peopled narrative that encompasses an unusual breadth of artistic, intellectual, social, and political concerns . . . [Byatt is] a master builder, laying each brick of her tower with consummate skill. Here is a novel in which everything matters.” —Boston Sunday Globe

“Uncompromisingly erudite. . . . Like Possession, The Children’s Book is a tour de force of literary chameleonism and social history. . . . [It] brings to vivid life the often irreconcilable demands of being an artist and being a human being.” —The Wall Street Journal

“A kind of tragic fairy tale, and Byatt does fairy tales wonderfully.” —Newsweek

“A fascinating literary achievement. . . . [With a] captivating sense of language and narrative. . . . A more genuine look at young adulthood than any teenage wizards could hope to provide.” —Richmond Times-Dispatch

"Riveting. . . . As this complex novel builds toward its finale, it forgoes one of Olive's enchanting endings in favor of something closer to life." —Time Out New York

“So well-researched that The Children’s Book could well have been a consummate history of the [Edwardian] era. . . . The book brims in rich pictorial description . . . But more than that, Byatt’s book is an astute moral lesson.” —Chicago Sun-Times