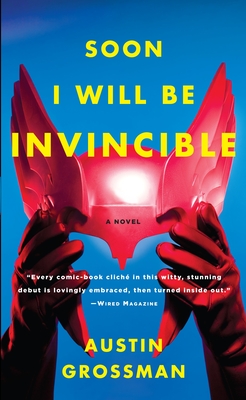 Doctor Impossible—evil genius, would-be world conqueror—languishes in prison. Shuffling through the cafeteria line with ordinary criminals, he wonders if the smartest man in the world has done the smartest thing he could with his life. After all, he's lost every battle he's ever fought. But this prison won't hold him forever.

Fatale—half woman, half high-tech warrior—used to be an unemployed cyborg. Now, she's a rookie member of the world's most famous super-team, the Champions. But being a superhero is not all flying cars and planets in peril—she learns that in the locker rooms and dive bars of superherodom, the men and women (even mutants) behind the masks are as human as anyone.

Soon I Will Be Invincible is a wildly entertaining first novel, brimming with attitude and humor—an emotionally resonant look at good and evil, love and loss, power and glory.

Austin Grossman is a video-game design consultant and a doctoral candidate in English literature at the University of California, Berkeley, where he specializes in Romantic and Victorian literature. He lives in Berkeley.

“Every comic-book cliché in this witty, stunning debut is lovingly embraced, then turned inside out.” —Wired Magazine

“Imaginative and, at times, achingly real. . . . I mean it as the highest possible compliment when I say that it would make a damn good comic book.” —Dave Itzkoff, The New York Times Book Review

“It's safe to say, there's nothing in popular fiction quite like it.” —Pittsburgh Tribune-Review

“This witty debut novel is sure to please fans of Lethem and Chabon and remind you that smart prose can be as vivid as any graphic concoction.” —Playboy

“[Grossman] fully embraces his inner geek; he gives us heroes and villains with a consciously sardonic eye.” —Cleveland Plain-Dealer

“It's a hoot. . . . A delirious, often hilarious story that both satirizes and pays homage to superhero story cliches.” —Tampa Tribune

“Soon I Will Be Invincible doesn't so much play with the clichés of superhero comics as bathe in their pulpy froth.”—Austin American Statesman