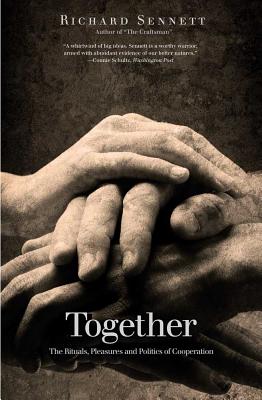 By Richard Sennett
Click on "Ask A Bookseller" to contact us via email for more information about this title.

In this sequel to his influential work The Craftsman, Richard Sennett explores how we can learn to cooperate in the intensely tribal, competitive, and self-interested cultures we inhabit

Living with people who differ—racially, ethnically, religiously, or economically—is the most urgent challenge facing civil society today. We tend socially to avoid engaging with people unlike ourselves, and modern politics encourages the politics of the tribe rather than of the city. In this thought-provoking book, Richard Sennett discusses why this has happened and what might be done about it.

Sennett contends that cooperation is a craft, and the foundations for skillful cooperation lie in learning to listen well and discuss rather than debate. In Together he explores how people can cooperate online, on street corners, in schools, at work, and in local politics. He traces the evolution of cooperative rituals from medieval times to today, and in situations as diverse as slave communities, socialist groups in Paris, and workers on Wall Street. Divided into three parts, the book addresses the nature of cooperation, why it has become weak, and how it could be strengthened. The author warns that we must learn the craft of cooperation if we are to make our complex society prosper, yet he reassures us that we can do this, for the capacity for cooperation is embedded in human nature.

Richard Sennett founded and served as first director of the New York Institute of the Humanities and is now a professor of sociology at both New York University and the London School of Economics.

“A whirlwind of big ideas. Sennett is a worthy warrior, armed with abundant evidence of our better natures.”—Connie Schultz, Washington Post
— Connie Schultz

“This humane work is broad in scope and will be of interest to sociologists, political scientists, and curious readers seeking hope for pursuing a more cooperative society.”—Library Journal
— Library Journal

“I envy any reader coming fresh to Sennett's work. Over four decades, his books have grown, volume by expert, companionable, readable volume, into a comprehensive diagnosis of the ailments of urban life and work, together with a series of hard-headed, historically rooted prescriptions for rescue and reform.”—Boyd Tonkin, The Independent
— Boyd Tonkin

"Sennet argues that changes in the 'social triangle . . . of earned authority, mutual respect, and cooperation during a crisis,' have resulted in an uncooperative character type who is becoming more common in modern society, one who—in search of 'reassuring solidarity amid economic insecurity'—acts according to the 'brutally simple' paradigm of 'us-against-them coupled with you-are-on-your-own.' . . . . Sennett's writing is engaging and he provides an interesting perspective on modern society."—Publishers Weekly
— Publishers Weekly