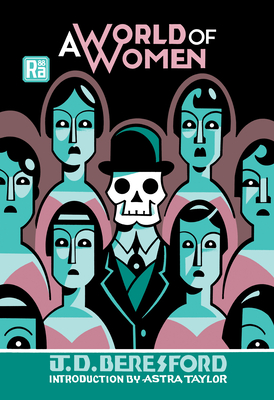 When a plague wipes out most of the world’s male population and civilization crumbles, women struggle to build an agrarian community in the English countryside.

Imagine a plague that brings society to a standstill by killing off most of the men on Earth. The  few men who survive descend into lechery and atavism. Meanwhile, a group of women (accompanied by one virtuous male survivor) leave the wreckage of London to start fresh, establishing a communally run agrarian outpost. But their sexist society hasn’t permitted most of them to learn any useful skills—will the commune survive their first winter? This is the bleak world imagined in 1913 by English writer J. D. Beresford—one that has particular resonance for the planet’s residents in the 2020s. This edition of A World of Women offers twenty-first century readers a new look at a neglected classic.

Beresford introduces us to the solidly bourgeois, prim and proper Gosling family. As once-bustling London shuts down—Parliament closes, factories grind to a halt, nature reclaims stone and steel—the paterfamilias Mr. Gosling adopts a life of libertinism while his daughters in the countryside struggle to achieve a radically transformed and improved egalitarian and feminist future.

J.D. Beresford (1873–1947) was an English dramatist, journalist, and author. His proto-science fiction novels include The Hampdenshire Wonder (1911), A World of Women (1913), and The Riddle of the Tower (1944, with Esme Wynne-Tyson); he also wrote in the horror and ghost story genres. A great admirer of H.G. Wells, he wrote the first critical study of Wells in 1915. His daughter, Elisabeth Beresford (1926–2010), was creator of the literary and TV franchise The Wombles.

Astra Taylor is director of the philosophical documentaries Zizek! (2005), Examined Life (2008), and What Is Democracy? (2018). She is author of the American Book Award winner The People’s Platform (2014) and Democracy May Not Exist, But We’ll Miss It When It’s Gone (2019), and coauthor of Can’t Pay, Won’t Pay: The Case for Economic Disobedience and Debt Abolition (2020). Her latest book is Remake the World: Essays, Reflections, Rebellions (2021).