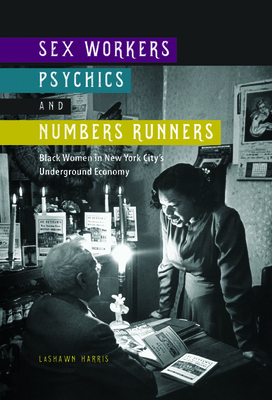 By LaShawn Harris
Click on "Ask A Bookseller" to contact us via email for more information about this title.

During the early twentieth century, a diverse group of African American women carved out unique niches for themselves within New York City's expansive informal economy. LaShawn Harris illuminates the labor patterns and economic activity of three perennials within this kaleidoscope of underground industry: sex work, numbers running for gambling enterprises, and the supernatural consulting business. Mining police and prison records, newspaper accounts, and period literature, Harris teases out answers to essential questions about these women and their working lives. She also offers a surprising revelation, arguing that the burgeoning underground economy served as a catalyst in working-class black women ™s creation of the employment opportunities, occupational identities, and survival strategies that provided them with financial stability and a sense of labor autonomy and mobility. At the same time, urban black women, all striving for economic and social prospects and pleasures, experienced the conspicuous and hidden dangers associated with newfound labor opportunities.

LaShawn Harris is an assistant professor of history at Michigan State University.

"Harris shows how these women skillfully created unique spaces to participate in the city’s informal economy. Her close attention to these women’s lives and labors during the twentieth century shed light on the perseverance, ingenuity and creativity of Black women." --Keisha N. Blain, Ms.

"This text goes a long way to articulating the major role that black women informal workers played in contributing to the wider American economy in the early twentieth century, and further challenging taken for granted conceptions of black womanhood, and gender role expectations."--Ethnic and Racial Studies

"In Harris's beautifully written book, the stories of black women in New York who have been absent in historical narratives vividly come to life. Harris takes us on a fascinating journey of New York City unlike any we have ever seen."--Public Books

"An impressive and significant contribution, not just to the historiography, but also to the larger conversation of the over-policing of black Americans' labor and leisure."--The Journal of the Gilded Age and Progressive Era

"A masterful compilation of criminal justice system records, archival newspaper accounts, and period-specific literature. . . . The book is a comprehensive and highly impressive analytical account of a diverse set of black women, and should be regarded as one of the foremost additions to the literature in its field."--Criminal Law and Criminal Justice Books

"Harris has written an important work--perhaps the most important on African American women in the underground economy. Sex Workers, Psychics, and Numbers Runners may well be a classic. It should be required reading for all interested in African American, criminal, social, urban, and women's histories, and other related disciplines."--Journal of American History

"A stunning achievement that makes an incisive contribution to African American studies and history, black women's history, and gender and sexuality studies as well as works that explore crime and vice. Harris's powerful book sheds a light on groups rarely studied and it will complicate readers's understanding of terms such as illegal, extralegal, and informal."--Kali Gross, author of Colored Amazons: Crime, Violence, and Black Women in the City of Brotherly Love, 1880–1910

"This book is a well-researched and valuable perspective on black women's labor in New York City's early-twentieth-century informal economy. Such a groundbreaking study provides new insights about the existence, relevance, and diversity within the informal economy through a racialized and gendered lens. An impressive work of original research and analysis in African-American, urban, labor, and gender history."--Cheryl D. Hicks, author of Talk with You Like a Woman: African American Women, Justice, and Reform in New York, 1890-1935