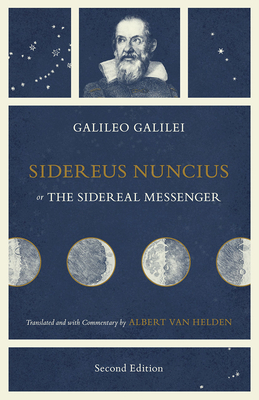 Galileo Galilei’s Sidereus Nuncius is arguably the most dramatic scientific book ever published. It announced new and unexpected phenomena in the heavens, “unheard of through the ages,” revealed by a mysterious new instrument. Galileo had ingeniously improved the rudimentary “spyglasses” that appeared in Europe in 1608, and in the autumn of 1609 he pointed his new instrument at the sky, revealing astonishing sights: mountains on the moon, fixed stars invisible to the naked eye, individual stars in the Milky Way, and four moons around the planet Jupiter. These discoveries changed the terms of the debate between geocentric and heliocentric cosmology and helped ensure the eventual acceptance of the Copernican planetary system.

Albert Van Helden’s beautifully rendered and eminently readable translation is based on the Venice 1610 edition’s original Latin text. An introduction, conclusion, and copious notes place the book in its historical and intellectual context, and a new preface, written by Van Helden, highlights recent discoveries in the field, including the detection of a forged copy of Sidereus Nuncius, and new understandings about the political complexities of Galileo’s work.

"A second edition of this widely used translation with a new preface summarizing Galileo
scholarship since 1989, an expanded bibliography, and very slight revisions and corrections in the translation as well as in the introductory and concluding essays."
— Journal for the History of Astronomy

"Van Helden’s new edition remains the best available for a student readership and as good a starting point as any to this revolutionary, scintillating book."
— Metascience