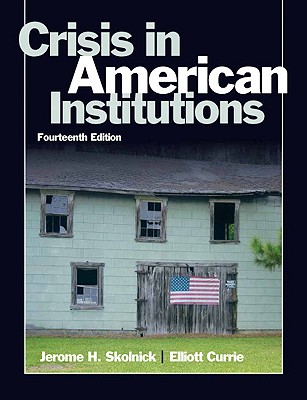 By Jerome H. Skolnick, Elliott Currie
Email orders@greenlightbookstore.com for information about this item.
Out of Print / Unavailable

Crisis in American Institutions provides students with an array of engaging articles that reflect America's social problems and encourage critical thought. This edition contains seventeen new articles, many addressing the escalating crises of American society in recent years, including the worst economic crisis in decades, the rapid rise in health care costs, the polarizing debate on immigration, and the continuing growth of economic inequality. Others update our coverage of longstanding issues, including the persistence of poverty, the continued growth of mass incarceration, and the politics of global warming.

Jerome Skolnick, a sociologist, currently teaches at the New York University School of Law where he is Co-Director of the Center for Research in Crime and Justice. He is also Claire Clements Dean's Professor emeritus at the University of California, Berkeley, where he was Chair of the Center for the Study of Law and Society. He has written many books and articles and has received numerous grants, honors and awards in recognition of his research and scholarship. These include the August Vollmer award of the American Society of Criminology; awards for distinguished scholarship from the Academy of Criminal Justice Sciences and the Western Society of Criminology; the Mills award of the Society for the Study of Social Problems (for Justice Without Trial); election to the honorary Sociological Research Association; and a Guggenheim Foundation fellowship. He was Director of the Task Force on Violent Protest and Confrontation of the National Commission on the Causes and Prevention of Violence, Washington, D.C. 1968-1969 and served as President of the American Society of Criminology from November 1993 through November 1994. In 1997, he completed a three year term as Chair of the National Academy of Science/ National Research Council's Committee on Law and Justice. In 1996 he was honored by John Jay College of Criminal Justice as their Criminal Justice Educator of the Year. Elliott Currie is Professor of Criminology, Law, and Society at the University of California, Irvine. He has also taught in the Legal Studies Program at the University of California, Berkeley, and in the Board of Studies in Sociology at the University of California, Santa Cruz. Professor Currie is the author of many works on crime, juvenile delinquency, drug abuse and social policy, including Confronting Crime (1985), Dope and Trouble: Portraits of Delinquent Youth (1991), Reckoning: Drugs, the Cities, and the American Future (1993), and Crime and Punishment in America (1998), which was a finalist for the 1999 Pulitzer Prize in General Nonfiction. He is a coauthor of Whitewashing Race: the Myth of a Colorblind America (2003), a finalist for the C. Wright Mills award of the Society for the Study of Social Problems in 2004 and winner of the 2004 Book Award from the Benjamin L. Hooks Institute for Social Change. His most recent book is The Road to Whatever: Middle Class Culture and the Crisis of Adolescence (2005), a study of troubled middle-class youth in America. He has been a consultant to many organizations concerned with crime prevention, social policy, and the enhancement of juvenile and criminal justice, both in the United States and overseas, including the National Council on Crime and Delinquency, the National Advisory Council on Economic Opportunity, the California Governor's Task Force on Civil Rights, and the Home Office of Great Britain. He is the recipient of numerous awards, including both the Donald Cressey Award and the Prevention for a Safer Society (PASS) Award from the National Council on Crime and Delinquency, and, most recently, the August Vollmer Award of the American Society of Criminology.