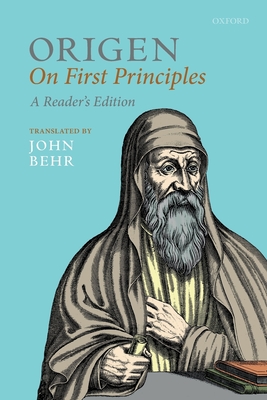 On First Principles by Origen of Alexandria, written around 220-230 AD, is one of the most important and contentious works of early Christianity. It provoked controversy when written, provoked further debate when translated into Latin by Rufinus in the fourth century, and was the subject,
together with its author, of condemnation in the sixth century. As a result, the work no longer survives intact in the original Greek. We only have the complete work in the Latin translation of Rufinus, and a few extensive passages preserved in Greek by being excerpted into the Philokalia of Basil
of Caesarea and Gregory of Nazianzus. John Behr offers a translation of one of the most important texts from early Christianity. He includes an invaluable introduction, which provides a clear structure of the work with significant implications for how the text is to be read and for understanding the character of theology in the early
Christian tradition.

John Behr, Dean and Professor of Patristics, St Vladimir's Orthodox Theological Seminary, New York, and Metropolitan Kallistos Chair in Orthodox Theology, Vrije Universiteit, Amsterdam John Behr is the Dean of St Vladimir's Orthodox Theological Seminary and Professor of Patristics and Metropolitan Kallistos Chair in Orthodox Theology at Vrije Universiteit. His previous publications include John the Theologian and his Paschal Gospel: A Prologue to Theology (2019), Asceticism andAnthropology in Irenaeus and Clement (2000), The Case Against Diodore and Theodore: Texts and Their Contexts (2011), and Irenaeus of Lyons: Identifying Christianity (2013). He is also the co-editor of The Role of Life in Death: A Multidisciplinary Examination of Issues pertaining to Life and Death(Wipf and Stock, 2015; with C. Cunningham).