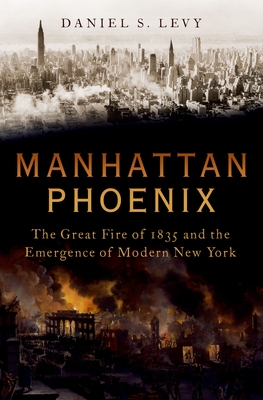 Shows vividly how the Great Fire of 1835, which nearly leveled Manhattan also created the ashes from which the city was reborn. On a freezing December night almost two centuries ago, a fire erupted in lower Manhattan. The city's inhabitants, though accustomed to blazes in a town with so many wooden structures, a spotty water supply, and a decentralized fire department, looked on in horror at the scale of this one. Philip
Hone, a former mayor of New York, wrote in his diary how the progress of the flames, like flashes of lightning, communicated in every direction, and a few minutes sufficed to level the lofty edifices on every side. By the time the fire was extinguished, a huge swath of land had been transformed
from a thriving business center into the Burnt District, an area roughly the same size as was devastated during the September 11th attack. In the end, nearly 700 buildings were destroyed. So vast was the conflagration that it was immediately and henceforth known as the Great Fire of 1835. Manhattan Phoenix reveals how New York emerged from the disaster to become a global powerhouse merely a quarter of a century later. Daniel S. Levy's book charts the city's almost miraculous growth during the early 19th century by focusing on the topics that shaped its destiny, starting with fire but
including water, land, disease, culture, and politics, interweaving the lives of New Yorkers who took part in its transformation. Some are well-known, including the land baron John Jacob Astor. Others less so, as with the Bowery Theatre impresario Thomas Hamblin and the African-American restaurateur
Thomas Downing. The book celebrates Fire Chief James Gulick, who battled the Great Fire, examines the designs of the architect Alexander Jackson Davis who built marble palaces for the rich, follows the abolitionist Arthur Tappan, chronicles the career of the merchant Alexander Stewart, and reveals
how the engineer John Bloomfield Jervis succeeded in bringing clean water into homes. The city's resurrection likewise owed much to such visionaries as Frederick Law Olmsted and Calvert Vaux, who designed Central Park, creating the refuge that it remains to this day. Manhattan Phoenix offers the story of a city rising from the ashes to fulfill its destiny to grow into one of the world's greatest metropolises--and in no small part due to catastrophe. It is, in other words, a New York story.

Daniel S. Levy is a senior writer for Life Books, which is part of Dotdash Meredith Premium Publishing. He has written on such topics as World War I, Anne Frank, Butch Cassidy and the Sundance Kid, the Civil War, Robert F. Kennedy and the Women of the Bible. Prior to that he was a senior reporter atTime magazine where he covered architecture and classical music, and a reporter at People magazine, where he wrote about social issues and crime. In 1997 Levy wrote Two-Gun Cohen, a biography of Morris Cohen, an English adventurer who became a general in the Chinese army, fought the Japanese duringWorld War II and following the war was one of the few people who was able to travel between Communist China and Taiwan.