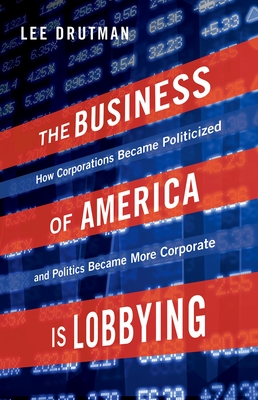 Corporate lobbyists are everywhere in Washington. Of the 100 organizations that spend the most on lobbying, 95 represent business. The largest companies now have upwards of 100 lobbyists representing them. How did American businesses become so invested in politics? And what does all their money buy? Drawing on extensive data and original interviews with corporate lobbyists, The Business of America is Lobbying provides a fascinating and detailed picture of what corporations do in Washington, why they do it, and why it matters. Since the 1970s, a wave of new government regulations and declining economic conditions has mobilized business leaders, and companies have developed new political capacities. Managers soon began to see public policy as an opportunity, not just a threat. . Ever since, corporate lobbying has become more pervasive, more proactive, and more particularistic. Lee Drutman argues that lobbyists drove this development by helping managers see the importance of politics and how proactive and aggressive engagement could help companies' bottom lines. Politics is messy, unpredictable, and more competitive than ever, but the growth of lobbying has driven several important changes that have increased the power of business in American politics. And now, the costs of effective lobbying have risen to a level that only larger businesses can typically afford. Lively and engaging, rigorous and nuanced, this will change how we think about lobbying-and how we might reform it.

Lee Drutman is a senior fellow in the program on political reform at New America. An expert on lobbying, influence, and money in politics, he has been quoted and/or cited in The New York Times, The Washington Post, The Economist, Slate, Mother Jones, Vox, Politico, and many other publications, and on Morning Edition, All Things Considered, Planet Money, This American Life, Marketplace, Washington Journal, and The Colbert Report, among other programs. Drutman also teaches in the Center for Advanced Governmental Studies at The John Hopkins University. Prior to coming to New America, Drutman was a senior fellow at the Sunlight Foundation. He has also worked in the U.S. Senate and at the Brookings Institution. He holds a Ph.D. in political science from the University of California, Berkeley and a B.A. from Brown University.