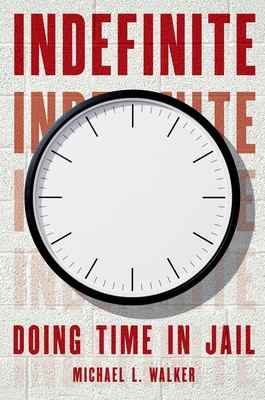 An intimate, first-hand account of the emotional and physical experience of doing time in jail and the strategies for enduring it. Jails are the principal people-processing machines of the criminal justice system. Mostly they hold persons awaiting trial who cannot afford or have been denied bail. Although jail sentences max out at a year, some spend years awaiting trial in jail-especially in counties where courts are jammed with cases. City and county jails, detention centers, police lockups, and other temporary holding facilities are regularly overcrowded, poorly funded, and the buildings are often in disrepair. American jails admit over ten million people every year, but very little is known about what happens to them while they're locked away. Indefinite is an ethnographic study of a California county jail that reflects on what it means to do jail time and what it does to men. Michael L. Walker spent several extended spells in jail, having been arrested while trying to pay parking tickets in graduate school. This book is an intimate account of his experience and in it he shares the routines, rhythms, and subtle meanings that come with being incarcerated. Walker shows how punishment in jail is much more than the deprivation of liberties. It is, he argues, purposefully degrading. Jail creates a racial politics that organizes daily life, moves men from clock time to event time, normalizes trauma, and imbues residents with substantial measures of vulnerability. Deputies used self-centered management styles to address the problems associated with running a jail, some that magnified individual conflicts to potential group conflicts and others that created divisions between residents for the sake of control. And though not every
deputy indulged, many gave themselves over to the pleasures of punishment.

Michael L. Walker is Assistant Professor of Sociology at the University of Minnesota-Twin Cities. His broad research interests include social control, stratification, and inequality, which he pursues through studies of the criminal justice system.